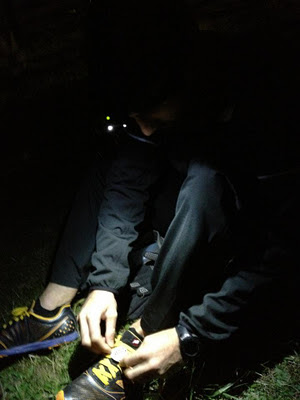 Like most people taking in the 2011 North Face Endurance Challenge at 6AM, I was shocked to see the lead pack already ripping through the Tennessee Valley aid station. 8.9 Miles in 61 minutes is under seven minute pace. Though I was glad to only be a few switchbacks from the aid station myself, I was saddened to realize my training was not nearly enough for the level of competition in this race. 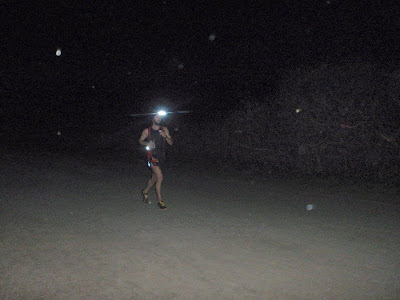 -Trailing the leaders through Tennessee Valley, photo by Pedro Martinez

As we headed down towards Pirates cove, I was thankful for the steeper pitch up and over into the cove that I felt would be a strength from my climbing work at Baldy. Yet, as I neared the top and looked across, the lead pack had pushed another few minutes ahead of me. I underestimated the value of speedwork in my training, and now every inch of the course now served as a reminder of how grossly I had miscalculated my training.

I’d listened to the words of elite athletes that I wanted to hear; “I haven’t done speedwork in years; ultras are about endurance” etc. etc. etc. Yet, the pace was a non-negotiable 7:25 average for 51 miles, and that’s not something that comes natural without tempo or interval training on similar terrain. To put that in perspective, it’s basically two 3:15 marathons back to back over 10,000ft of climbing and 10,000ft of descent. To further understand it, take your average downhill pace, and calculate the difference between that and the mean pace (7:25), and add that to 7:25 to get your average uphill pace. So, if you can only manage a 6:30 downhill pace, you have to run at 8:50 pace for your climbs. For me, I needed much more than the 1-2 short speed work sessions I did a week; this was high rep, long interval, long tempo power on Marin-like hills.

As my mind slowly wrapped around what was going on, I kept pushing my body to keep fighting to stay within sight of the lead pack. Yet the harder I fought, the slower things went as my stomach turned inside out on the way up Cardiac, mile 18. I eased back on the calories, but knew it was only a matter of time before a major bonk if I waited too long. Unfortunately, after a 30 minute gap, not even a saltstick would go down and I vomited before it even went down my throat. I walked for a bit, eased back, pondered the 25 miles awaiting me, and ran on.

The lead pack had 14 minutes on me at 22 miles. My day was definitely done, the lead women were catching me, and they were only flying faster and faster as I was bonking harder and harder. I had a lot to think about over the last 25 miles; where is ultra running going? What do I really love about ultra running? Is this ever going to be a good race for me? Have I found something I don’t even have enough talent for anymore (like my college track days)? Should I just drop at the next aid station and get a ride to the finish? 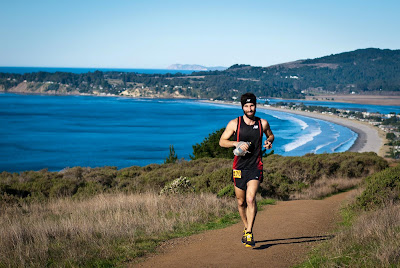 Though I hated getting passed for the last 25 miles, I knew that I had gone out to test my limits with the world’s best, and found them. I could hear my conservative conscience saying I could’ve ran a faster time if I’d gone out slower, but for me ultra running has ceased to be merely about time or place, but more about personal satisfaction. I’ve won other races before, and not been satisfied because I ran too conservatively. Sure, a win is a win, but a feeling of satisfaction is a feeling of complete, honest, physical exertion to my limit that left my very best out on the course. The day was a wash, and I was embarrassed about my performance, but the remaining miles were still challenging, and they were thoroughly testing my resolve and mettle. So I had some time to answer my questions: 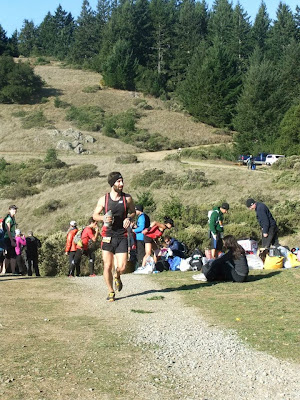 Prize money and sponsorships are bringing out an extremely professional ultrarunner that is talented, hardworking, and flawless on race day. Their performances are still within my grasp, but these performances require specialized workouts as a new type of challenge in training: speed and form over sheer endurance. I trained for three months focusing on climbing endurance. Any speedwork was off the cuff or in 50k races (which doesn’t even begin to cut close to what I needed to run). Meanwhile Dakota and Mike had spent their months averaging 3-4 long, hard tempo/hill interval workouts a week. Tempo workouts that drove mileage up to 90-130 miles per week built speed first, but also reinforced endurance. My endurance on race day was more than sufficient and would’ve come with long tempo runs, but the speed was missing. After the work I put in for my 100 miler this summer, I should’ve realized I was lacking speed much more than endurance, but I was stubborn and chose the easier training for my mind. When I finished Saturday, I wasn’t anywhere near dropping dead from a lack of endurance.

Though I felt like I could keep going all day, I had humbling feelings while crawling up steep hills that the leaders had probably run. However, racing isn’t just about executing with robotic perfection, but about driving in motivation for future training. If I had run well on Saturday, I would’ve been really happy and proud of myself, but I wouldn’t have the same type of urge I have right now to be smarter and tougher on myself in training next year. If anything, I might get cocky and relax more. For now though, I’m determined to find new creative ways to run much, much better next year.

As I crawled past mile 38, a half marathon remaining, I squinted at my watch and did fuzzy math on my projected finishing time. “8 hours.. definitely 8 hours if I’m lucky.” Yet, my damage control protocol of more and more gels, chomps, saltstick, gu brew was working better than I thought. I wasn’t flying by any means, but I caught up to Jorge at mile 42, and jogged over to Tennessee Valley with him and Rickey Gates. Though the last hill up went slow and hard, I still crawled into the finish at 12:28PM, just 7:28 minutes since I had start off with such high hopes. As ugly as the last 25-30 miles had felt and looked, the end result wasn’t terrible. In that sense, I had displayed a similar talent from Angeles Crest this summer. Even if I’m feeling and looking terrible, I’m not necessarily running terrible; I can still crawl just fast enough to pull in a decent time. So, maybe I am much better at mountain 100’s because that’s what they’re largely about sometimes.. However, there’s nothing keeping me from having perfect days, and I’m ready to train hard for those next year. 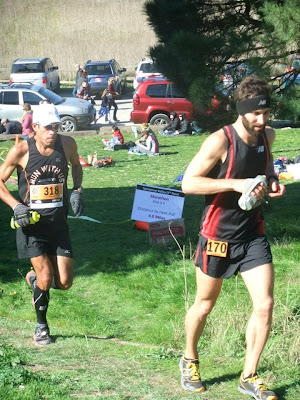 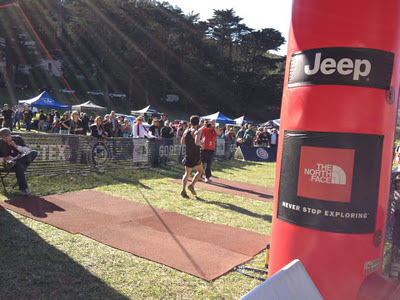 The plan now for Hardrock is to take 1-3 weeks off, and start up training with a written program and to incorporate trail speed work and a few highly competitive races in the spring to build more experience. I believe I’m capable of finishing Hardrock based on last spring’s high country training, the real goal now is keeping up with the big dogs and acclimating as best I can in Southern California’s 10-11 thousand foot peaks. 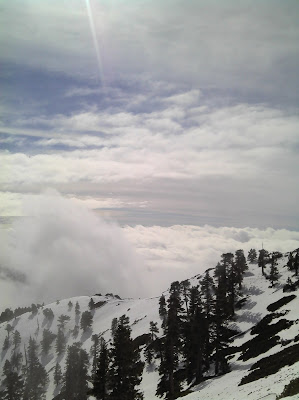 I'm feeling eager through the soreness in my legs for the long days in the San Gabriels.. you just gotta hooooold on..


"Hold On" by the Alabama Shakes
Posted by Dominic Grossman at 12:20 PM

Great, honest post. The thing about long, hard tempos is that their so damn long and hard. Admittedly, I'm not about to run at the front of the pack, but also have come to the same conclusion about the need to add in the long, purposeful tempos regularly into the mix.

Just need to get the snow to melt...

Thanks for your refreshing honesty. There definitely is a fine line with enjoying the experience of training and racing and burning out. Speedwork and tempo work is certainly difficult, but hell, if we didn't want to discover our potential we wouldn't even try and suffer as we do! Now, I'm about to get dorky here: "All you have to decide is what to do with the time that is given to you." To reiterate your point: Your max potential is your goal. I think that if it is achieved, you will truly be content. Inspiring stuff, Dom. I believe you can do some major damage next season.

In the words of Andy Salinger, "if you wanna run fast, you gotta run fast."

Looking forward to running up in da Gabes with you!

Thanks Jim, I feel like getting guilt off your chest is worth the embarassment as it lets you feel a little more true. The snow is gonna be pretty deep with La Nina this year, but it'll be something everyone gets to deal with ;)

Michael, speedwork is definitely the way the sport is going. It's not what some of the elites were espousing last year, but it definitely something that can draw the line between a recreational runner and a competitor. I gotta get out on Baldy with you and Jorge, I feel like you've got plenty of mountaineering skills to share.

Chris, I heard that in November, I was too busy being stubborn.. We'll get some good vert this winter.. some verrrrry good vert.. Hope you can make it out to Colorado!

We should have a talk soon. If you're coming to the Unbreakable premier we can do it then. If not, when you're at Katie's(SaMo), Megan and I will invite you guys over for dinner one night. Just let me know.

Michael, I'll see you tonight at Katelyn's show or tomorrow at the run