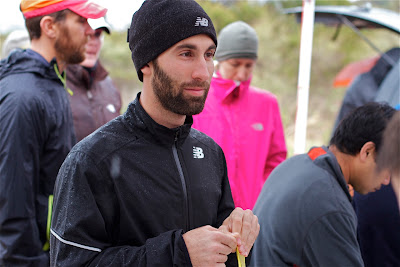 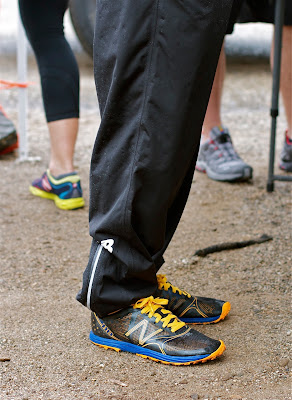 The tune up at Point Mugu went really well. I've been working on developing my non-100 mile legs this fall, and after being surrounded by speedy shorter distance guys (Chris, Jesse, Sean, etc. etc.) I feel like the race at the Santa Monica Mountains 50K last Sunday showed that they've been rubbing off on me as I felt more comfortable than ever running relatively fast. The rain poured for 75% of my race, but the MT110's were far too grippy to be slowed down by anything but the thickest mud. I did have a few ponds that I went through were I slipped a bit and aggravated my hamstring, but after 5 days of solid recovery, the knot went away and I've been running pain free since.

The race itself was really fun. Chris took off in his normal "blazingly fast-no need to warm up-are you guys racing today or what?" and put a couple minutes on me up the first climb. I maintained through the meadow and shivered through the rain and wind up top. I grabbed my windbreaker at the bottom of the first loop and had to fumble with the zipper for a good frustrating minute. Third place passed me, and I got close to ripping the jacket, but eventually fixed the zipper.

Eventually I was off, and climbing Ray Miller putting down Gu's casually and relaxed, enjoying the wind and rain under my 4oz jacket. I made good time down the fireroad and was suprised to see Chris on the turn around only 2 minutes ahead of me still as I was just running well within my comfort zone and had suffered a significant delay. I passed 2nd and powered up the climb to the fire road. Seeing all the other runners was a big boost, and I ran along enjoying the day under my cozy wind breaker. 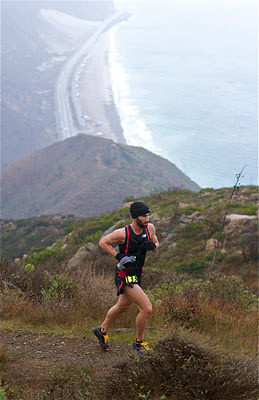 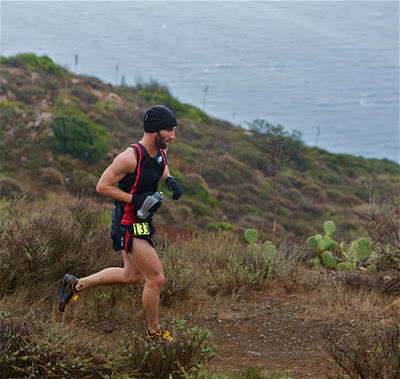 Through the Rain -Photo By Jayme Burtis

The second north loop was sure to be a grinder, but for the first time in my 3 races on this course, it wasn't rough at all. I'd fueled well earlier and comfrotable trotted up and up, and watched Chris put down the hammer up the traverse to Mugu Peak. I could've given chase, but the mindset of the day was to race train like I was running 50 miles. So, I stayed within my comfort zone and stayed extra safe on the slippery, rocky, dangerous descent down to La Jolla. I knew the downhill skier in Chris took it like a green circle beginner route to blow through, but thoughts of driving my knee or a sharp boulder kept me carefully tip toeing down to the bottom for the final 5 miles.

I took the last hill well, and let my stride out over the last downhill to cruise in to the finish in 4:20, 11 minutes faster than my previous all out best (but 8 minutes off Chris). The day had gone as well as I could've hoped for, as my stomach was flawless through every part of the day.

Diet:
Over the course of this year, I've learned to adapt my diet to a new level of training that I never had to fuel in college. The limitations of my college situation dictated shorter training weeks and fueling was much less of an issue. Working 20-30 hours a week, studying 40 hours a week, and running maybe 10-15 hours a week allowed almost any fuel from fast food to sugary baked goods. Being on a tight budget, I used what worked and never worried about the training implications, because.. I wasn't nearly training hard enough to be affected by the food.

Since this spring's high mileage weeks, I've learned that a steady mix of greens, low gluten/HFCS carbs, lean chicken and turkey (and some beef) isn't just what's healthy, or what works.. But what I crave.

To walk into a Jack in the Box in 2009/2010, was simple and enticing with their tasty and cheap options to fuel long study sessions or hours on the floor of the running shop. To walk into one today, my memories of intense gastrointestinal pain this spring makes nearly the entire menu seem like a disgusting, un-appetizing laxative laced bag of saturated fats and chemicals. I'll step off my soap box in a moment, but perhaps this is the answer to the obesity epidemic: an exercise regimen that doesn't just burn calories, but also makes unhealthy food unappealing.


At any rate, I've been feeling good about North Face 50 for a while now, and it's time to see where I stack up. I rested a lot this week, as the bad knot in my hamstrings required it. My last workout for the race was the Mount Wilson Toll Road on Sunday: 9.8mi, 4200ft in 1:43 which equaled my previous personal best. I was by no means fresh, but I ran consistent and strong which is what I'm looking for in Marin at mile 40. 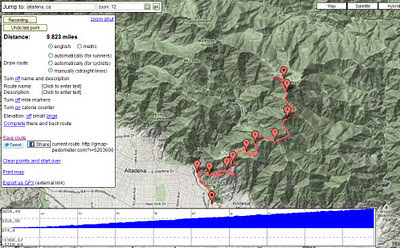 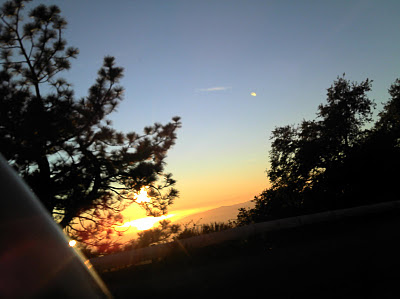 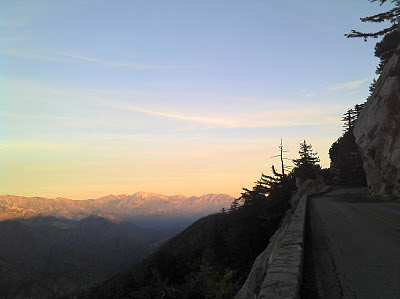 I haven't had this dialed in diet and training schedule going for too long, but I feel rested and strong and ready to run with some of the best.

The last two Good Old War shows I was privy to:

It looks like you're coming into this race really well and a peak effort could be in store for Saturday. Good luck and look forward to reading all about it!

Looking good for TNFEC50 Dominic. Being a brit I'm rooting for bragg and sharmanian but your the 1st american. Throw it down bud

Thanks Michael, I get amped for these things, my heart will be racing Saturday before my feet even start racing.

Richard, they're both pretty sharp runners, this has been the year for europeans, we'll see what happens..

Good luck this weekend Dom! Hope you hold it down for the Front Range.

Looking forward to some fun adventures with you and the healing Panda soon.

I love running up to Wilson from Eaton, even if it is all fire road, great training route. 1:43 is kinda soft though, just saying, haha.

Show me how it's done in the 50 mile distance buddy.

Intense training can often lead to a desire to eat better. Otherwise, you feel like all that work is going to waste. And moreso, you want a diet that can fuel even more hard work. Even for those of us still plugging away at 12-hour running weeks, I think there's a lesson there. And sweet shoes.

Chris, I know it's not my best possible time, but that will come in due time.. What's your's btw??

Alex, I am unfortunately all too oblivious at times.. Sometimes something really has to make me sick to my stomach several times over to teach me a lesson. But you're right, everyone can benefit from just eating a little smarter. It doesn't have to be perfect and cost a fortune, just a little bit better to fuel things right.

Hey! You forgot to talk about the importance of getting your precious Udo's Oil right after a hard effort. Just like you did after the SMM50k... oh wait.... CHRIS PRICE UDO BOMB!!

I've gotten to the top in 1:40, but not pushing it too hard, I guess it's on, let's see how fast we can do it. Starting at the gate, ending at the hose bib you tried to thaw out by peeing on it?

I blame my hamstring knots on Chris Price. He's a dirty sabateur that deserves NO beer.

1:40 is something I could do (not pushing it too hard) if I wasn't tired from reading Chris's excuses.