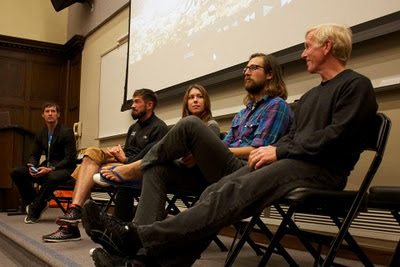 -The Los Angeles Premier of Unbreakable (Photo by Billy Yang)

If you haven’t gotten the chance to see JB Benna’s Unbreakable, hopefully you’ve pre-ordered the DVD to get it ASAP. Even still if you have seen it in theaters, it’s worth buying and keeping in the inspiration library. For me, I’ve found ultrarunning to go back and forth between being either overtly mentally or physically challenging, and often times absurdly hard in every way imaginable. For a bad cramp, there's saltstick, for sleepiness, there's caffeine, but the mental aspect has no tangible solution. This documentary changed that for me as it is my saltstick/caffeine for a lack of motivation or mental fortitude.

All the runners in this movie are easily found in magazines, billboards, iRunFar.com interviews, blogs, and the like, but to get close to them and really hear their minds and souls work through a race, you need someone who’s able to get comfortable and close with them (with a video camera), and the most competitive 100 miler in the history of our sport to expose all their strengths, flaws, and emotions.. Which is why you're hopefully nodding and/or buying the DVD right now.

I got to watch this movie twice (once in San Francisco before TNF50, and once in LA), and the second time I was privy to hang out and run with Hal and Tony. I’ve been reading more blogs and irunfar.com articles this past fall and noticed some scathing critiques of the top runners from a lot of people that have never actually met the people they’re criticizing. Everyone is allowed to say as many stupid things as they want in public forums, but I believe those nay-sayers are cutting themselves short on learning and understanding more about the sport and how much they could gain from these guys.

I've met Hal a few times before, and got to run and talk with him for a few miles the morning after and went to dinner with him and Jimmy later that night. Though it’s not much time to spend with someone, he’s an open enough guy that it’s easy to learn a lot about him. Hal is someone who has honed his ability to race well in back to back races because he’s spent years and years putting out the some intense and deep performances on trail. When faced with a situation that forces the majority of the field to choose to slow down, Hal finds ways to keep moving quickly. I mean, he had a bum ankle in the 2010 Western States and still scraped through the first 50 miles near the previous course record pace, and still crawled another 30 miles to the river ahead of many other elite runners. If anyone has anything to envy about Hal, it’s his superhuman pain tolerance; but even still, he’s earned it and honed it through years of painful gut checks his own accord.

At the LA premier Hal was quoted as saying that he grew up skiing and running in the Rockies with friends that thought it was weird if you didn’t spend your weekends getting out for back to back 12 hour days. I think Hal’s strength is in his strong mind in the sense that he has no concept of “too hard.” He doesn’t doubt his training or his talent much (even if others do), and he guts out low points in races better than anyone else. If you want to learn from him, watch the movie with the understanding that all that he does and says (and what others say about him) is either the truth or an understatement. He’s the real deal, and always has something ridiculous to say to boot.

As for Tony, I got to show him around the LA basin and take him out to our local alpine favorite, 10,064 ft. Mt. Baldy. 90 Minutes of driving later (and probably 180 minutes of conversation packed into 90 minutes later) we were at Manker Flats. We had a fractured group of local stars Chris Price and Jorge Pachecho along with Katie (knee still in rehab) and I. I hadn’t run a step for 10 days, and much less even been at altitude for a month before that morning, so I knew I was in for some humble pie. 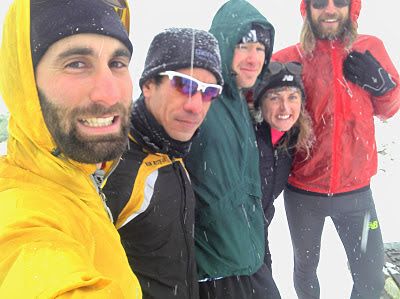 Tony hiked comfortably while Jorge and Chris labored to run/hike to keep up with him, and I trailed even farther behind. To best describe it, I’d say he looked like he was casually walking down the street while the rest of us looked like we were climbing a trail that offered 3500ft of gain to 10,000ft in 3.3 miles (which we were). Plain in simple, Tony is beyond comfortable in the mountains. The way that I hop along the PCT to the top of Badden-Powell passing hikers, and leaving them with surprised looks on their faces is he way Tony hikes along ahead of other competitive mountain runners. Strong lean legs, deep efficient lungs, strong feet, and an efficient metabolism; he’s made to cover lots and lots mountainous ground (and vert).

To fully understand how Tony came to this point, it takes a little more digging out of him. He’s spent summers in Leadville and Silverton bagging 14ers daily, sacrificing the extra cash of other jobs in less desirable running locations to do what he really loves. He’s consciously chosen mountains in almost every way from his masters degree in mountain hydrology, to his current stomping grounds in Boulder. What some people may not understand is that he’s extremely honest with himself, and that drives a lot of his decisions. He’s run 200+ mile weeks for 5 weeks at a time because his inner desire to be outside and be the best runner trump all the pain, distractions, and common logic that would pull him away.

I think he sees Hardrock as the greatest mountain 100, and wants to be the toughest, strongest, smartest, best-trained runner on the start line. Like many other runners, he sees the journey (both the actual race, and the training for the race) as beautiful and fulfilling. It’s not about what anyone else thinks (advice posted in comments on his blog by people whose experiences mostly pale to his), it’s about taking all his fastest ascents and descents of his favorite mountains and stringing 10 of them together in the most inspiring cathedral in the sport, the San Juans.

No one knows exactly what tomorrow’s heroes of ultrarunning are doing as far as training goes; and Tony loves that in the sense that there’s no written science yet for elite competitors. He only knows that he’s not going to be under-trained, wear too clunky of a shoe, or waste anytime going after anything but his biggest goals. 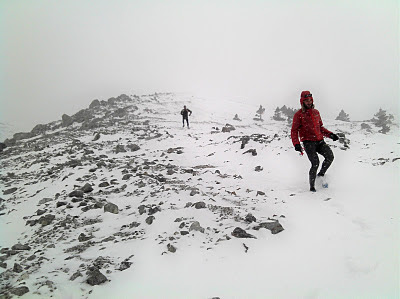 -Dashing through the snow, just off the summit

I relate to both these runners and look up to them in a lot of ways. I study them and ask them tons of questions and sound theories off them to figure out exactly what I have to do to achieve similar success with the gifts I have. The elite runners I’ve had the opportunity to talk with and study (Jorge, Tommy, Tony, and Hal) have made a lot of interesting points that have converged towards similar themes:

-Set high goals, and then set even higher goals that make those look silly. Train earnestly for your highest goals.

-Believe in your training: whether that’s posting high numbers or empirically proving a demanding training program to yourself, all that matters is that it gives you supreme confidence on race day

-Be painfully honest with yourself: if you’re not getting it done in training, you’re not going to get it done on race day. Mimic your training to what you’ll have to do in the race, and make the race environment your playground (even if that’s scree fields on 14ers).

-Be courageous: it’s a simple sport, running 30-100+ miles makes everyone hurt, and you’re going to have very dark moments in races even when you’re in the best shape. They don’t mean you’re weak, they mean you’re pushing human endurance limits.

-Love the mountains, the elements, and the distance; it’s too hard just to merely "like it". 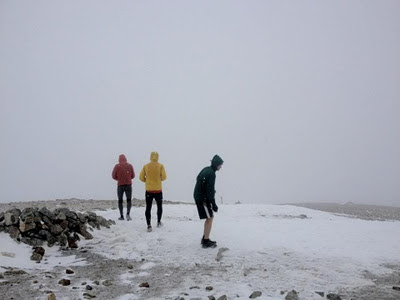 -Photo by a frozen Katie DeSplinter

I’ve had a lot more time lately to ponder these themes and take in various forms of endurance media with my year end recovery break from running, and I’m already getting wild dreams and twitches in my toes anticipating the 2012 season. It’s gonna be the best yet.

Continuing to enjoy your posts and lessons-learned. I'll have to pick your brain at some point on the nuances of the San Gabes for AC this summer. Happy Holidays if I don't see you Thursday.

I imagine you're talking about the movie as inspirational - and it is. However, the rest of the post has me eagerly anticipating my club's hill workout tonight.

Thanks Michael, I'm cleary not a grad student as you can see by my use of other theories without even an attempt to use MLA citing format.. but maybe someday I will.

Alex, buy that movie. JB said if he makes enough money off it, maybe he'll do Hardrock this year (I made that up, but it's probably not far from the truth). Thanks for the love, I hope your workout was rad.

This is actually a really good post. I am surprised. HA.

It is all about genetics,training, and heart. I lack all 3.

One more thing....what is up with the top picture? You have a beard so what is the point of the mask?We only wear masks in Alaska when it gets 10 below.

Also if it is cold enough for a mask than your handhelds would be worthless because they would be frozen in 5 minutes. That picture might fly with the SoCal crew but I see right through it. Just saying.

Man I like to pick on you. I do have much respect though.

1) Thanks Hone, that means a lot from you

2) I don't use the buff much in the up position, but at that point cresting the summit into howling icy winds, it was a nice luxury. Also, I didn't have a beard at that time. You should've made a comment about how over the top that softshell jacket is, and that I obviously wasn't working hard that day (I wasn't).

I did buy it, and if there's a Hardrock version coming up, they can just have my money. And the workout rocked. It would rock more if the MT110's would come out already though, since some of us are still stuck with the Rogue Racers as our trail flats (with a 10mm delta...). *sigh* Soon.

Seriously, if it takes JB being kidnapped in the middle of the night and transporiting him to Silverton with another team of mountain men with handicams to do it.. I'd pay for it.

The 110 has two colorways, the AK and ES, but the running styles of the two runners are very apparent in each shoe. Skaggs speed in the fully curved last and low profile fit and Tony's uphill agression in the seriously traction. It's does everything well (except run slow).

OH, and when Evan Hone gets operational after his operations are complete, he's actually not going to be able to complain about it very much (but he certainly will because the AK colors almost look like Kobe's black mamba shoes save for the blue instead of purple)

I skipped the surgery on my right side so I can keep complaining about how I would be elite if I wasn't running on a bum hip....kinda like Kobe with his fake wrist injury. HA!