2 Weeks to go, and there's a good chance that enough snow may melt to turn the race back into a CR attempt. Why? The next 10 days have highs from 82-95F at Squaw Valley meaning some serious snow is going to get melted for a fast course to appear from underneath the snowpack. The cam at high camp still shows plenty of snow, but 2 weeks is a long time.

Regardless of the snow, everyone in the field will have to deal with the same course, so the debate is whether the winner will pick up the CR too. 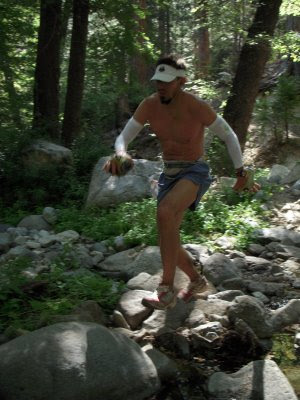 One of Hal's AC Wins

4) Hal (if the top 3 run well, he won't keep up.. if they blow up, the race is his)
Alpine: Definitely not a stranger to the alpine having lived in Colorado, but just not quite the same pedigree as the big 3 that train above the snow line fairly often.
Canyons: Best chance to make up time, has more than proven his ability over the past years to take the 100 degree canyons in stride without any major mental/physical effect on his body.
Rivers: His durability and endurance have been proven down Cal Street, and he does have speed in his pedigree, but the raw speed of the younger runners will be too much to chase down/hold off if they're not wiped. 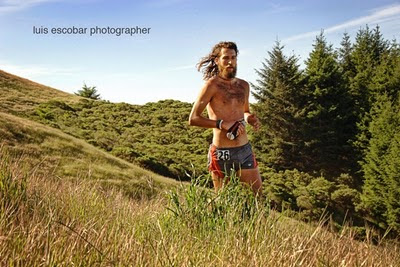 2) Tony (Him and Geoff are a yin and yang of mileage, but both equally talented: Geoff wins more races, Tony logs more miles)
Alpine: The sheer mileage he has run above 7,000ft makes him a premier alpine runner. Tony probably wishes the whole race stayed high up, and should either lead or stay right on Killian's shoulder.
Canyons: The heat could wipe him. No word on if he's been in the sauna (probably not his style), but he'll need to aggressively hydrate to fight off overheating and stay in the race. The canyons are a famous place for elite to DNF, but I believe in Tony's toughness. He also needs to run the downhills controlled to keep his knees in the race.
Rivers: If his legs and stomach are under him, expect record splits down Cal Street. He has plenty of speed in his legs, it's all a matter of how much potential can be tapped. 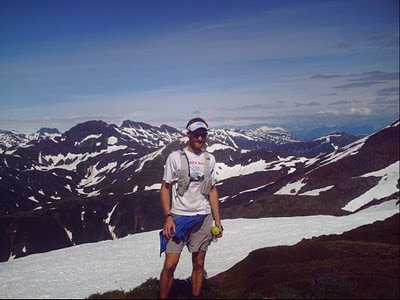 2) Geoff (Lower mileage than Tony, but incredible 2009 season. The two should get along great;)
Alpine: Will follow Tony or Killian closely. I would be surprised to see him lead as he's more tactical than excitable, but he does have plenty of alpine experience in Alaska to run well.
Canyons: Not sure if he has gotten in some sauna time, but he has the toughness and the mindset to run strong in the worst conditions. It all depends on his fueling strategy; an extra water bottle could make all the difference.
Rivers: Maybe a step slower than Tony if all things are equal. Expect some heroics out of Geoff to stay in it to the end. A true 100 mile champion, his fangs come out at night. 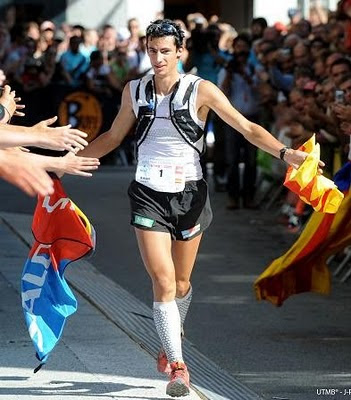 1) Kilian (if 100k days didn't kill him, America is his)
Alpine: A child of the Pyrenees who grew up peak bagging; he competes in ski mountaineering on a world class level, and in the past 3 years he has proven there is no finer sky runner in the business. Expect CR splits through Robinson Flat if he goes 90% and doesn't get lost.
Canyons: He's got the best gear, physicians, and coaches to keep him strong and ready to run strong through the canyons. I expect him to pull away here and post a larger and larger lead utilizing his blazing downhill skills, and strong climbing ability.
Rivers: If he comes out of the canyons strong, his light and effortless stride will be tough to chase down. He isn't know for running cruisers fast, but if he can do everything else well, he can more than hold onto a strong lead.

There are many factors: gear/fueling philosophies, leader/hunter mindsets, and downhill running durability/speed among others, but those are all apart of why no one can ever actually know what is going to happen in a 100 mile race. If we already knew, no one would have to race, but this sport is about the human spirit and our ability to endure and shine in the toughest settings.

An onlooker at an 100 once told me "these people are just psychologically off; I don't understand why you'd celebrate and encourage such a masochistic and deranged addiction to needless pain and injury." My reply was "well, I actually think it's a celebration of the human spirit."

Johnny on the spot. I'm trying to get more involved, knowing races, names, and other crap. I dig how on top of your game you are. I expect a free autograph of your Wheaties box after badwater.

I hope one of these guys gets on a box of Wheaties! I love reading about the big dogs and what they do to win races. The example winners set (barefoot marathons included) about what we can accomplish, is a bit of inspiration, motivation, and personal expectations all in one.