Though I was starting to feel a bit tired from a long week of work and the effects of some higher quality weeks of training, when Chris called me up Friday night (as I was busy getting Katie lost enroute to the Little Dragon concert) my gut suggestion for a Saturday run was "High Country?" I knew those miles weren't easy, but the impending winter pulled my mind into Cooper Canyon. 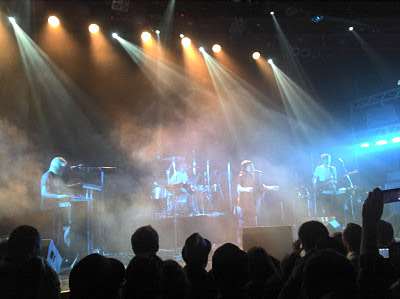 The show with Peter and Caitlyn was awesome, we had some delicious waffles at "The Waffle", went to bed and after waking up late and speeding over to La Canada to meet Chris, we headed up for the 26-49 miles of the course for the first time since July. Perhaps we had forgot that it was October, but upon opening the door at Cloudburst, we were greeted with a suprisingly cold breeze funneling out of Cooper Canyon. Katie started off for Islip, and Chris and I drove on to Islip to run to Chilao or Hillyer or whatever we felt like. 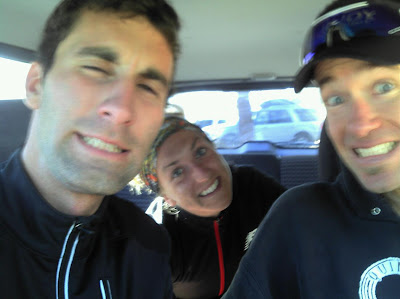 When I'm on the course with someone new to it, I find it impossible not to point out every vista's finer points, or each section's unique details. As Chris was sincerely interested in giving AC a shot in 2012, it left me with free reign to mention almost every detail on the course. However, as much as I talked (and I almost always had something to say), I found our pace was naturally around CR pace. The warm up was only 5 minutes off CR pace to Eagle's Roost, Cooper Canyon was 74 (6 minutes off a very fast section) and we ran the last two sections negative spliting by 3 and 5 minutes to Three Points and Hillyer.

The trail was cleaned up a little bit, and my legs were a bit more dialed in for shorter races, but I found it interesting how much easier it was to run the sections fast in the cool air. I remembered the contrast of heat on the day of the race, and it felt like this Saturday was uniquely carefree in the sense of opening my stride up without any risk of over heating.

Jim O'Brien was quoted as saying that race day was perfect as it was cool (he wore a long sleeve shirt) and he ran comfortably all day.

So, as I look back on my performance this summer, I start to wonder why for the second year in a row, I let heat be a secondary concern. On my run last night, I thought of all sorts of inventions and ideas for 2012 if I really wanted to run my fastest and overcome the heat. Yet, this July nothing seemed like it was going to be too bad, and I lost some serious time flailing in the heat.. Interesting thoughts to ponder 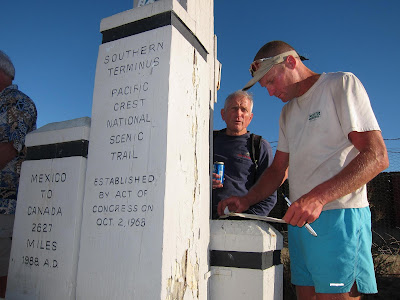 And on that ponderous note, yesterday Scott Williamson put the final touches on the 2,650 mile Pacific Crest Trail Fastest Known Time of 64 days, 11 hours, and 19 minutes. Reading his interviews about what works for him on his thruhikes, the main theme he mentioned was rhythm. Food that doesn't throw off his rhythm, light gear that lets him keep a good rhythm, and a consistent schedule that keeps his.. rhythm even. Racing is exactly the same, the pace can't be blazing in the first miles if it isn't blazing in the last as well.

More speed work, ended the Sunday run early at 13 mi because the legs were burnt out from Saturday. Los Pinos 50k in 11 days!


digging the new stuff, can't wait for the rest of the album
Posted by Dominic Grossman at 12:23 PM

Cold weather. Ha! Love the title. Fly up and run the Susitna 100 with me in Feb and we will experience some seriously cold weather together.

Also there is no way you can compare a July AC course to a nice cool fall one. You would be much faster without that damn heat beating down on you.

Hah, yeah just updated it to a more accurate "Colder Weather" title. I just noticed it was the first time in months that I didn't start or end with my shirt off. (Please give Prizzle a hard time for wearing a freaking windbreaker in 50 degree weather.. Total fairy)

It's amazing how different it is.. It's almost like the July AC we now have is a completely different race demanding a whole new agressive heat management philosophy for competitive racing.. Get in on it next year man!