Looking back on the year thus far, it seems like the clearest moments were being fully invested in a run, completely present, and free of distractions. As simple as this sounds, it hasn't been that easy lately between work, friends, and non-running fun. There's this theory that you're a product of your environment, and as much as some people may argue against that, they're also probably the people that are actively working to change their environments too.

I've made a few small changes moving my desk at work, setting up weekly goals and schedules on my phone, and following through on commitments even if that meant some un-organic runs and cross training. The noise of the internet has exposed a rift between my goals for December (and 2012) and themes of recovery floating around a lot of ultra running blogs. Fall is naturally a time to lick wounds from the summer and regroup, but it seems like the level of excellence seen at 2010's Western States hasn't been seen since then. This isn't to discredit the CR's and PR's that anyone has set since then, as some great runs have been completed by a lot of great runners, but it feels like the urgency has petered out this year. 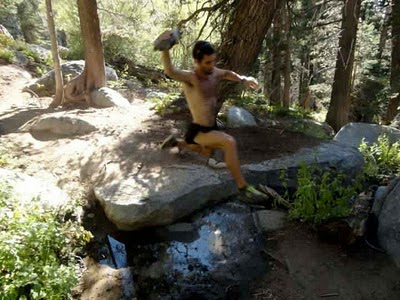 -Clarity on the PCT near San Jacinto

The clarity I find in runs lately is that regardless of what the blogosphere and twitterspace is trending, my running is my responsibility. My commitment to developing speed, power, endurance, and competing at my highest level is irrelevant to anything anyone else is doing. How I'm inspired, whether by old race reports, or videos is my prerogative. I train alone a lot, and that in itself allows freedom to cover whatever terrain I want, for as long as I want, and as fast as I want. More hills? I know where to find them. Speedwork? I've got some good shoes for that. I've got all the tools I need to push my limits and enough experience to know what happens to my body when I apply myself hard enough. The question is whether I'm going to always see through all the static in everyday life and follow my baseline.

I dig your blog and your last post. Sometimes I think I'm going to hit my proverbial ceiling but I know there's more there if one wants it. From my experience it's become a simple formula: hard work with balance. Keep living the adventure!

Really proud of you for nailing that second workout on Sunday. You always push to get the most out of what you have and it inspires me daily. You're going to do great things this December. I KNOW it.

Thanks for the inspiring words. I'm excited to see what the future holds; especially when it's in our own hands (mostly). Looking forward to hearing about your progress.