The idea that anyone could ever stop growing is something completely impossible to me (and there's not much that I consider impossible). Through growth can sometimes be small or great, lately it's been a little bit more substantial as I've entered the core of my training for Angeles Crest. 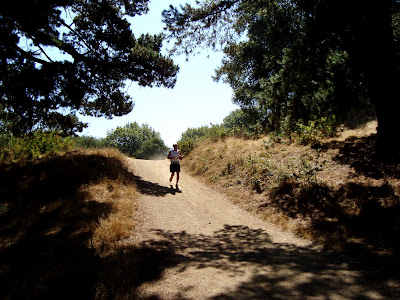 Two years ago, I was entered in the 2009 race before the holocaust that was the Station Fire. At the time, I had blind optimism that the race would go well for me. I was training with some runners who had little else to go on but wishful thinking, and it seemed to us that all you could do was prepare to get beat up by the course and try not to get lost. The race was beyond control, beyond confidence, beyond fathomable; it was just a crazy monster of a race that ripped runners to shreds. I thought maybe I would just show up with 60mi/5,000ft weeks and things like altitude sickness, technical trails, long climbs and descents, and the 21,610 feet of climbing and 26,700 feet of descent would all go well on account of some good 50k's which really meant.. well.. nothing. In simpler terms, fear and denial were the theme.

The training I did after Badwater in 2010 with Jorge proved to me that there was much more to this race. There was a certain rhythm with which the sections were strung together that tested the runner in almost the toughest way every time. When you had just finished a rough 6.5mi section of steep sandy and rocky singletrack from Chilao to Shortcut at mile 59, the course gave you a very long 5.5 mile downhill descent that made you beg for uphill, and then gave you a long 2.5 mile climb up to Newcomb at 68. It goes on and on and basically always challenges (AC) runners with everything that could take them out of their comfort zone. However, if you could learn to adapt to that rhythm, you could run much faster than the rest of the pack. That was much easier said than done, and it really sounded comparable to trying to hug a feral wolverine. 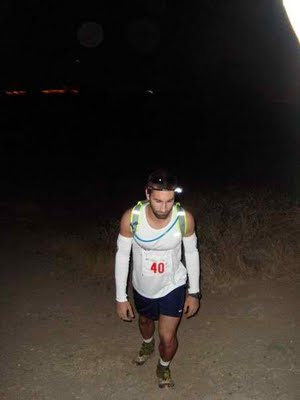 In 2010 I was even more attune to the intense difficulty of the race, but I was also inspired by my training with Jorge in which he took a fearless approach to every big climb, no matter how many miles he had logged that week. Winning the race 3 times already helped to give him that confidence, but it wasn't simply that he was a good runner, it was that he grown from similar humble beginnings to deeply believe in himself and his training.

When Jorge was first training for the race, he trained with a more conservative group of runners that practiced hiking the hills more than running them (note this method is perfectly fine if it works well for you). He went along with it for only so long before he told Mari that he wanted to try to run Vinvent Gap to Islip on his own. Those that know this section know it's difficulty, and those that know Jorge, know that he holds himself to a high standard. When he runs, it's almost a high profile trial in which he investigates the deepest, most honest answer to the question "what is the best that I can do?" Jorge went out and ran Badden Powell faster than he ever run it, and when a friend saw him and told him to wait for some more runner's coming behind him, he said he couldn't wait and that he had to keep on going. He knew what he had to do to do his best; it wasn't easy, it wasn't comfortable, and it wasn't sociable, but it was better than failing to answering the question of what his best was with complete honesty. 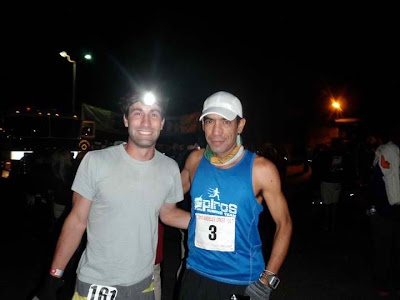 -Jorge on the morning of his 2010 win: calm, confident, beautiful. Me: still worried.

This year, 2011, I've been blessed with a degree and a great job that let me train hard and spend the weekends in the high country. I have the luxury of packing up my camping gear, spending $20 in groceries at Trader Joes, and another $30 in gas and heading up to the mountains with Katie. I have replaced my fear and denial with ambition and courage as I've set about my goal of attempting to run the course at record pace. To do so, I've had to forgo the physical, social, and mental concerns and break down the race on my own. I've been experimenting with gear, training, and nutrition to figure out what it really takes to run course record splits consecutively.

As much work as I've done on my own, I consider myself extremely lucky to have Jorge as a mentor to work with me. When I run with him, he gives me positive reinforcement to believe in myself in spite of many other good reasons to believe otherwise. I sometimes think about how bad the course would break me last year on training runs, and how tough it was just to run 23 hours last year, but then he's starting to pull away on a climb and I know I have to put my head down and believe in myself to keep up. Do I have any specific reason to? A few good treadmill workouts during the week at sea level? Some speed in 50k and 50 mile races? Those are nice ideas, but they are certainly not concrete evidence that I can keep up or even push the pace at altitude in the middle of 100+ mile training weeks. Still, I believe, and I keep going.

And that is the main point of this long winded blog post: Angeles Crest is not about mountains, altitude, or challenging terrain. It's about believing in yourself when you don't have a reason to; it's about the courage to try something beyond hard when the rest of the world is incredulous; it's about your own personal honesty with yourself; it's about living life with passion and conviction; and most importantly, it's about bringing out the best in human beings. I don't see this race as a fearsome challenge anymore, but an amazing opportunity to do achieve something brilliant. We aren't much more than tissue and bone, but when we are committed and driven, our incredibly insignificant small bodies do some amazing things that shock the entire universe.

So that's what I do: I eat well, I get my rest, I train consistently, I go to the course on the weekends, and I run as hard as I can with Jorge whether or not I'm making the CR splits. And when it all comes together, the experience itself is my true prize. The CR goal is nothing but a synonym for the idealized vision of performing at my very highest level. If nothing else, it is getting to find out the answer to the question, "what is my very best?"

Total: 100mi, 21,600ft
This was a climbing intensive week/weekend and the numbers showed with the most ft climbed in training in a week. Spent the weekend mostly on this part of the map: 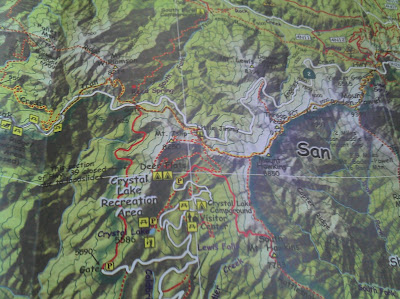 You're an animal! And you have a little fuzzy animal nesting on your upper lip.

Good to hear that you're healthy and running your ass off , I expect nothing less.

Thanks, it's actually kinda fun lately ;) We gotta get out after you heal up from San Diego.. There's some great peaks melting as we comment on this blog.