Lately, it's seems like you can live and entire life in a Saturday. The run at Baldy started off with good intentions as Sean, Brian, Katie, and I assembled for the climb out of Bear Canyon. The goal was 6.4 mi, with 5700ft of gain to the summit of Baldy. Sean O'Brien does not flinch at these numbers, and after the warm up to Bear Flat, he kept charging, driving Brian Kroggman on with him over the summit. I meanwhile had a realization that I hadn't recently climbed anything like the 11-1200 ft/mile sections after Bear Flat, and my calves weren't sure if they were going to snap or explode first.

After turning around at 4.5mi due to too much ice to handle without crampons (Mt. Baldy has a tendency to kill due to it's steep icey slopes near the top, and unpredictable weather.) I resolved to drive up to Manker to run some 3.5 mi/1700ft repeats to the Notch. After eating some food and gathering myself, I took off for the first repeat and hit :40 minutes pretty easily. It was as if the failures of the morning had been another year in my running career. Here we were at 7840ft, some 5,000 ft already in the bank, and the miles were melting away effortlessly and better than ever. Admittedly, the grade was much lower, but it still wasn't flat by any means.

I went back down and returned a little slower, but stopped to enjoy the view and a small meal before heading back down to finish up. It was a beautiful day with great views of Catalina, and as I stepped back out to descend, my body began to feel more in sync than it had felt all day. I ran the 3.5 back in 20 minutes, easily cruising at sub 6 minute pace.

I guess if anything, these are good signs as far as what I want my training to allow me to do. It means a lot to me as an ultrarunner to be able to run some fast splits late in my races. It's not about trying to run a 100 mile race well as it is about literally running 100 miles. I want to feel like I really am in shape to be even able to state such goals. I want to believe I have no major shortcomings as far as endurance performance. I think this is what most ultra runners dream of.

Though it'll take time to get up the big 1200ft miles at Sean's pace, I know I have it in me to do so based on everything else that's been happening since December. There's a few muscles growing in these legs.

At any rate, here's the week: 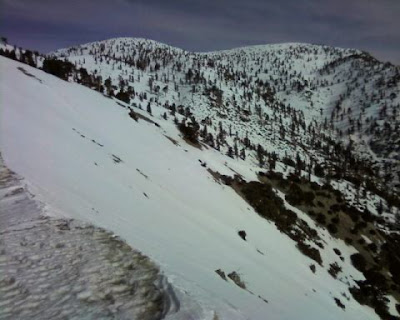 -The end of the line for not so sure footed ultra runners.. However Sean and Brian did go over the top without crampons or fear of imminent death.


My favorite Super Bowl Commercial: Nothing says cute like a young kid trying to practice using the force

Posted by Dominic Grossman at 10:02 PM