I signed up for the LA marathon the other day. 16 Days till race day, I feel kind of silly about it. I'll be up at American River 50m in four and a half weeks and figured I should be able to run 26 fast at LA, recover in 3 weeks, and do it again with a 25 mile trail addition at the end for keeps. However, I started to wonder about my whole entire outlook on running on Sunday.

I’ve never truly loved running on roads, and I begun to notice how much I loathe the times during the week when I’m not near a trail and am running on pavement for just 3-10 miles. I mean, for me, a 3 mile road run still isn’t as booring as mile 80 on a trail loop course (i.e Javelina). I did a 24 mile loop out of Mandeville up to the backyard trail, the “mountain”, rodgers, the hub, bent arrow trail, mullhulound, and westridge, and then finally luna. As I was running, I checked my watch for pacing trying to get closer to 9-10 minutes/mile on the climbs, and 6-7 on the descents. Inevitably though, the technical sections would slow me down out of my goal range. As I came down Luna, the most technical 2mi section in the Santa Monica Mountains, my pace was barely 10 minutes at best (downhill) as I took on the steep, windy, cramped, and technical section. This section of trail is so bad, there is rope in one section to keep you from loosing your footing and crashing into the turn at the bottom of the next section. I looked around and couldn’t find any mountain bike tracks on the trail. Though there probably are some crazy mountain bikers that attempt the descent, not many do so without injury or greater speed than a runner. Uphill, I’m not sure even Lance Armstrong can crank out a sustained climb even with the most ridiculous gear set-up.

Then it sort of just came to me again (I have thought about this before, but never espoused it in written form). Under natural human power, technical steep trails are fastest on foot. Horses, motorcycles, bikes, ATVs, jeeps, and the like wouldn’t make it or would have to give way to a runner. In every other setting, a runner should give way. For example, I can out run mountain bikers climbing up fireroads around Topanga, but I can only outrun them on the downhills for a half mile or so before I admit their mechanical advantage. However once we’re heading down something technical, very few can keep up without crashing, and those that can have to work back the distance I put on them on the climb.

I guess what I’m getting at is that technical, mountainous, trail running is the only objectively worthwhile use of running. I’m not arguing that someone can’t “run” through the paved streets of a large city for 26.2 miles and call it a metaphysical accomplishment of sorts as they’ve ran further than most people can. However, most people can go just as fast, and just as far with a 80$ pair of roller blades and glide to a 3:00 marathon, or pedal a 2:30 on a 125$ Kmart bicycle; or even rent a small car for 25$ and do a 25 minute marathon all day long; My point is that I don’t have a defense for marathoners espousing their abilities as running 26.2 miles fast to non-runners. It really is much easier and faster to get on a bike.

The only time my arguement in defence of running works is on technical trails. Let’s say we’re camping, and there’s a campsite on one side of a mountain and a single track leading out to the highway on the other side of a mountain. It’s steep, it’s muddy, it’s rocky, it’s not accessible by bike or car (or rollerblades) and your diabetic friend is polishing off a gatorade when he realizes he ran out of insulin as is about to go into schock. Either you can run quick enough to get the insulin, or you can’t.

Running for fitness, sport, and endurance on paved roads will always be popular, and big city marathons will always attract more entrants than any trail race ever will be able to, but it’s almost a war to do so. There’s not much natural beauty in New York or Chicago or Los Angeles compared to Lake Tahoe or Yosemite or the Grand Canyon. When the LA Marathon went from being in March to May last year, only 9,000 of the usual 20-25,000 ran it because they thought it would be too hot. (I actually was one of the 9,000 that signed up anyways). Sustainability in terms of consistent motivation to run should have some natural intrinsic love that transcends pace, fitness, recognition, or socializing. I believe most people enjoy the trails themselves when they run on trails, where running on roads, it's more about thinking about PR's or talking to friends to avoid thinking about where you're actually running.

Not to pass judgement or anything... but I've found my answer 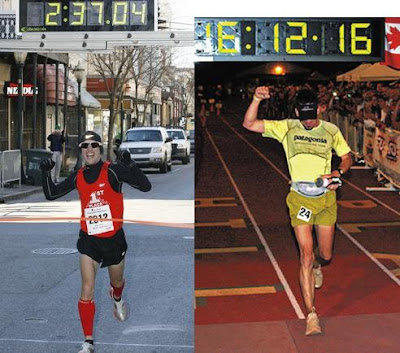 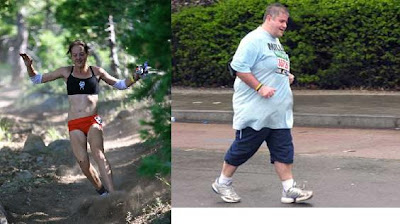 Posted by Dominic Grossman at 12:49 PM

leave the fat kids out of it dom.

Objectively, there is a higher percentage of fat kids on roads over trails.