There's somethings in life you can get by "winging it". You can wing those really easy quizzes in HUM/SS classes, you can wing a 5 mi run, and if you're in good shape, you can even wing a marathon with a little espresso love GU. However, a 100 mile trail race isn't exactly wing-able.

Essentially though, that was the game plan going into Javelina. My mileage had been pretty low as I prepared for Long Beach with more emphasis on speed work. Secondly, I was pretty nauseous when I had the flu the week before the marathon, and when you're 155/5'10" and eat 5,000+ calories a day on average, <1,500 calorie days really aren't good for you muscles. Gutting out 2:49 at Long Beach left me feeling weak and 8lbs under weight (pretty significant for me). As an ultra runner, it's usually not that hard to run the day after a marathon, but even this was pretty difficult for me. Essentially, I lost a lot of muscle- my strength to weight ratio dropped even thought I lost weight. Though this wasn't the ideal training sequence going into Javelina, but this wasn't the worst.

But then, things got worse. I sprained my ankle pretty badly 10 days before Javelina (previous post). I rested a day, ran again and felt very tender, rested a day, ran again and felt cripple on the downhills, and then completely rested the 5 days till race day. Those 5 days felt like an eternity, and when I tested the night before the race, it still wasn't even 70%. It was very sketchy to even think of attempting running 100 miles on it, but I made it my goal to just finish. In hindsight though, I think it helped me stay cautious at the start and stay relaxed as half the lead pack burnt out and DNF'ed. 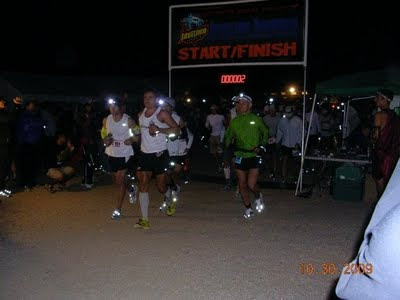 Lap 1: After a typically restless night before the 4am wake-up call, we got to the race 50 minutes before the start, and set up my gear under our tent. The gun went off, and Dave James and I took the lead and chatted for the first couple miles. He a really interesting and friendly guy and has a heck of a work ethic (hopefully coming from me, you understand how much of a beast this guy is). As we neared the first hills of the day, I eased up to let my ankle get into it on it's own time. However the lead pack started to slowly pick up the pace as the competitive juices began flowing as the trail turned to single track. There was no doubt about Dave's intentions to win right from the start. He stopped to relieve himself, and immediately sprinted back up to the head pack. He did so again refueling at the first aid station, and then sprinting up to the leaders. I wondered if this strategy would hurt him later on, but it turned out he had energy to sprint all day long enroute to his impressive 14:20 CR. I however kept in reactionary mode ignoring everyone else that passed or pulled away from me. I came through the first loop alone at 2:05, relatively relaxed. 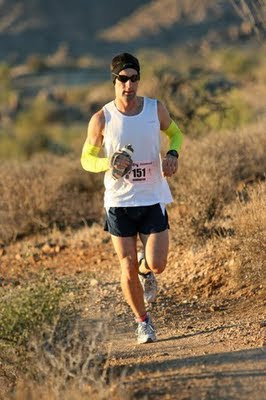 -Farside of the loop, first lap, -Will LaFollette 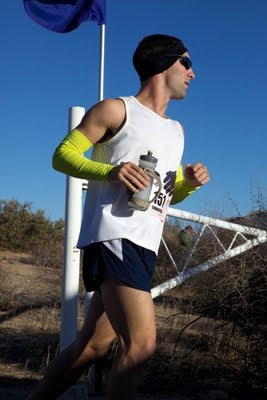 
Lap 2:
After a quick refueling at basecamp, I put on my hat and headed back out up the slight incline to Jackass Junction. The washing machine loops allowed me to immediately see my main competition and then all my friends as well. It was an instant boost after running along alone for an hour or so to see everyone else, and I pushed well up through the upper parts of the course again. The costumes were incredible and I couldn't believe the stuff that people were wearing while running. At this point, every miss-step still hurt, but I was beginning to flow better as I got used to the trail and released some pent up endorphins. I cruised to the end of lap two in 4:19 for the first 50k. 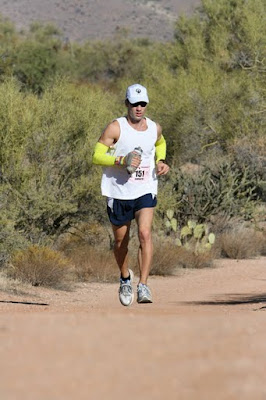 -Heading up to Jackass Junction, Lap 2, Will LaFollette

Lap 3:
At this point, I had been using chomps, GU, and powerbar electrolyte water for the first 50k. I've always liked the idea of using powdered drinks to gradually take on fuel and electrolytes, but unfortunately, it doesn't offer any flexibility for adjusting concentration of your beverage between stations. That was the problem essentially at the end of loop 2. I had taken on too much salt, and was still locked in race mode. I tried to have a bit of a turkey/avocado/cream cheese wrap, but after trying too hard to force it down, it came back out about a 1/4mi out of base camp. Beverly Anderson-Abbs had a prime view for all the action as she passed me, and was very nice to check on me as I deposited my fluids and wrap on the trail. The sun had just begun to get a little stronger, and as I climbed up to coyote camp, I only had one bottle full of electrolytes. Unfortunately, I had to walk a decent bit of the climb parched and nauseous. Eventually I got to coyote camp, downed plenty of water, and continued on cautiously through the loop a little bloated since I had over-hydrated at coyote camp to compensate for only having one bottle. I ran into more friends and began to get more enthusiastic in greetings (this pattern would continue throughout the race). By the time I got back to jeadquarters, it'd taken me nearly three hours, and dropped me a few spots. All in all though, I wasn't in too bad of a shape for having run through the middle of the day with hydration problems. I picked up a bottle, and got ready for battle with the sun and heat.

Lap 4:
The real heat of the day came out on this loop. Every time you left Jeadquarters, you had a boost of energy from you crew cheering you on, but later in the race, that boost subsided sooner and sooner as you realized you had a few long miles of uphill. This was most noticeable as I started lap 4. Michelle Barton and I had begun to leap frog a bit pushing each other on each time the other would lead. The 5 miles from Jeadquarters to Jackass Junction seemed steeper and longer than ever before, but we refueled well and ran/hiked together out of the the aid station (mile 50) for the race. Michelle was a real trooper (as always) as we tried to maintain pace through the hottest part of the afternoon, but still was honest about the pain. The greetings on this loop went from the standard "hey! looking good!" to man grabs and full on hugs. Though not many people may do this in an out and back marathon where some people feel a little better than others, 100's aren't like this. After running for 8 hours, EVERYONE is in some sort of deep pain that humbles them completely. I saw P-Dubs about a mile after pulling out of coyote camp on my way to headquarters, and we hugged it out pretty hardcore.. and I gotta say, it really hit the spot. I was so proud to see him pushing on courageously, but felt such great empathy. In a way, it made me run harder realizing everyone from our group was suffering together, and that I had to keep trying to do my best myself. Eventually the lap ended, 3:02, 10:37 for the first 100k. Lap 5 as promised would be extremely tough.
Posted by Dominic Grossman at 10:02 PM

Sounds pretty punishing, especially given your pre-race circumstances. What was your weight like after the race? Looking forward to an update on lap 5...