Well, that was a rough trip to Oregon. I mean, we were in the state for all of four hours before our rental car was broken into, and my knees were healthy and strong for less than 24 hours. I suppose I could have read up more on the thieves of Forest Park, and done some more appropriate training for the undulating and rocky terrain of the Gorge, but I didn't and I learned some valuable lessons.

Going into the race, fitness was approaching mild early season levels that made me confident I could run in the 10 hour range. I had cross trained, mended ankles and toes, hit some good workouts and long runs, and gotten enough rest. It wasn't my best lead up to a race, but it was what I thought was what I needed to be ready to push hard all day. 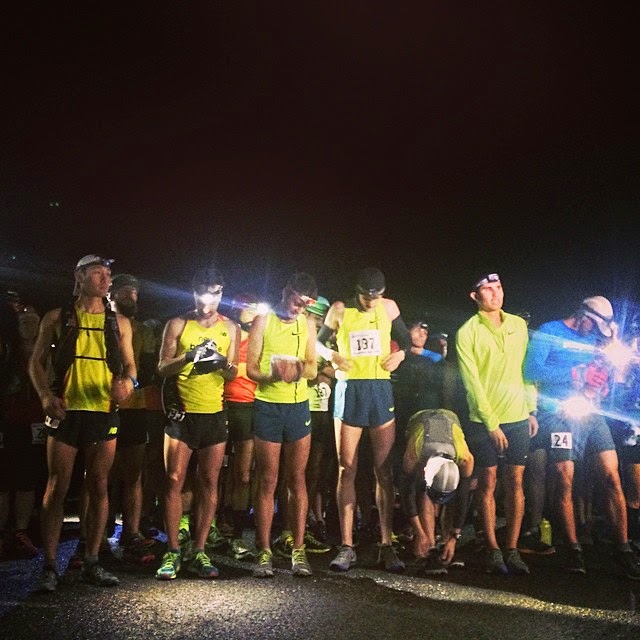 Race morning came with a 3 AM wake up call, and a 4 AM start time that felt more like 2 AM because despite the large group of energized and talented runners at the front of the pack, I felt tired. Eventually I got into a rhythm and started clicking off a few better miles in the pitch black dark, when my Petzl NAO started giving a warning flicker to let me know that the battery was dying. I had let my head tilt back slightly on the road section, and the lamp was on full blast for 2 miles, which apparently is not good for its battery life. I stumbled along praying for sunrise and made decent time for the first two and a half hours of darkness.

When sunrise came, I was relieved, but it was short lived as I suddenly saw the lead pack 1 switch back above me stopped in their tracks and standing around. We had come to a well flagged dead end, and no one was certain what to do. Yassine came up and thought we were on the right trail, but eventually after climbing and descending the same stretch of trail 3 times, we headed down and took a left at the last trail junction and figured out where the course vandals had tricked us. We re-marked the course and headed on, into the next aid. 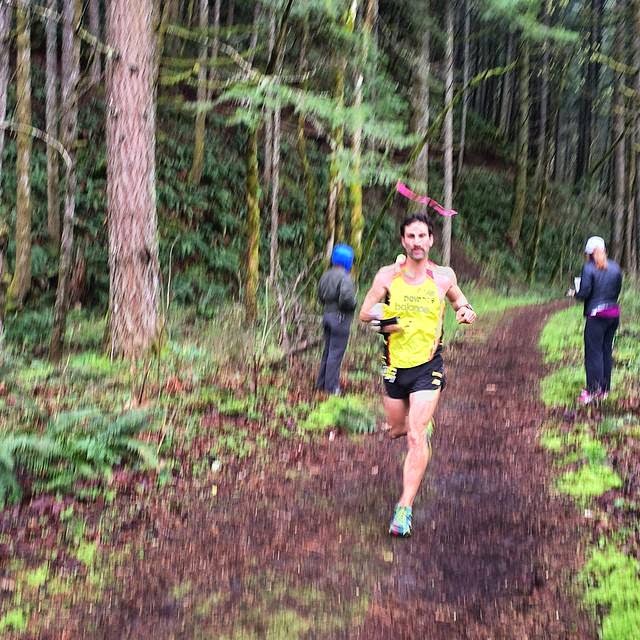 I had been running with one water bottle and 3-4 gels for each 9 mile stretch on the course. Though lighter and more efficient than a pack, it wasn't a good call when the wheels started to rattle a bit heading into the turn around. I sat and switched shoes and chewed on a protein bar to get some calories down, and then took off back towards the start.

I didn't have to do much more than maintain a consistent effort, but the ratio of caffeinated to non-caffeinated gels was so high, that I started to bonk hard, regardless of how many gels I ate. The will to finish was still strong, and I tried to fight through the bonk to get to the next aid station ASAP. The feeling of muscles screaming for energy while moving slower and slower wrecked havoc on my legs. The quads felt heavy and my feet felt uncoordinated and slow. I started to get tendinitis in my right knee and hobbled into mile 40, hungry and broken. 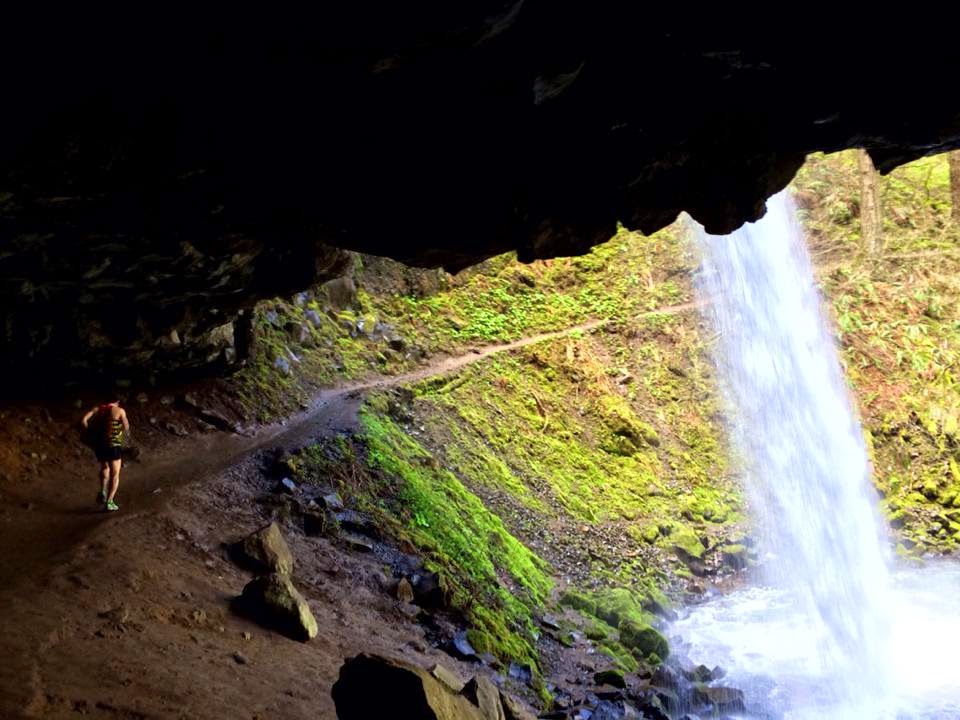 I would've quit if I knew what was best for myself, but I was completely focused on finishing and knew if I could push myself out of three more aid stations, I could finish the race. So, after inhaling some corn dippers and ginger ale, I headed west and kept pushing my rapidly deteriorating body along.

Everything hurt on my right knee: the front, the back, and even my shin a bit. I felt like a car losing oil, and it got uglier every mile. The most troubling was at the top of the last climb where I had pushed too hard and couldn't even jog a hundred yards of carpet trail. The course is mostly rocks, roots, twists, and turns, but this was bonafide "take off your shoes" carpet trail... That I couldn't run.

Thus, my finishing time was quite a bit slower than what I had anticipated, but still a finish that left me with a silver lining.


I was banged up for a couple days after, and did little more than walk or sit, which did nothing to nip my problem in the bud (or butt if you keep reading). From my first person perspective, my tendinitis was not simply a matter of not having strong enough stability muscles, but rather a continuation of my glute problem that caused my quads to pull so hard on my knee, that they wore out the tendon.

I've had problems from driving after running causing a knot to form in my glute and keep my right hamstring extra tight. It first became apparent when I went to see my favorite PT, Michael Chamoun who proceeded to engage in some agress PNF on my hamstrings which completely knocked out the knee pain for an entire run.

In hindsight, I would say that my intervals and strength training leading up the race set me up with the power and strength to rip apart my patella tendon due to the fact that I was not getting any effective lengthening of my hamstring after training was causing it to shorten.

I went to Lake Sonoma and watched some great performances play out, and the game I played in my head as I watched was "which are the seasoned ultra runners like me with super tight hamstrings", which coincidentally were runners in the most pain and struggling the most in the last miles of the race. To run well on trails, runners naturally have to develop strong vertical and horizontal body control. This normally creates limited flexibility in the hamstrings over time as the body tries to protect itself. Abnormally, many runners spend several hours a day sitting in a chair that smushes the glutes and hamstrings and shrinks the hip abductors. The end result is not just a shortened stride, but also a high tension environment for the knee.

Over the years, I've relied on youth to complete long arduous races. Being a pure mountain ultra runner for so long has been an enjoyable indulgence, but it hasn't been sustainable in regards to being as competitive as I want to and being healthy. If there's nothing else that this post is about, it's about being healthy and avoiding injury in an world that eventually demands some muscular maintenance.

That said, I'm working on learning Active Isolated Stretching, doing my strength training, and thinking long and hard about my goals for the summer. I feel like I'm on the right track to recovery, but I'm not out of the woods yet (or back in them). 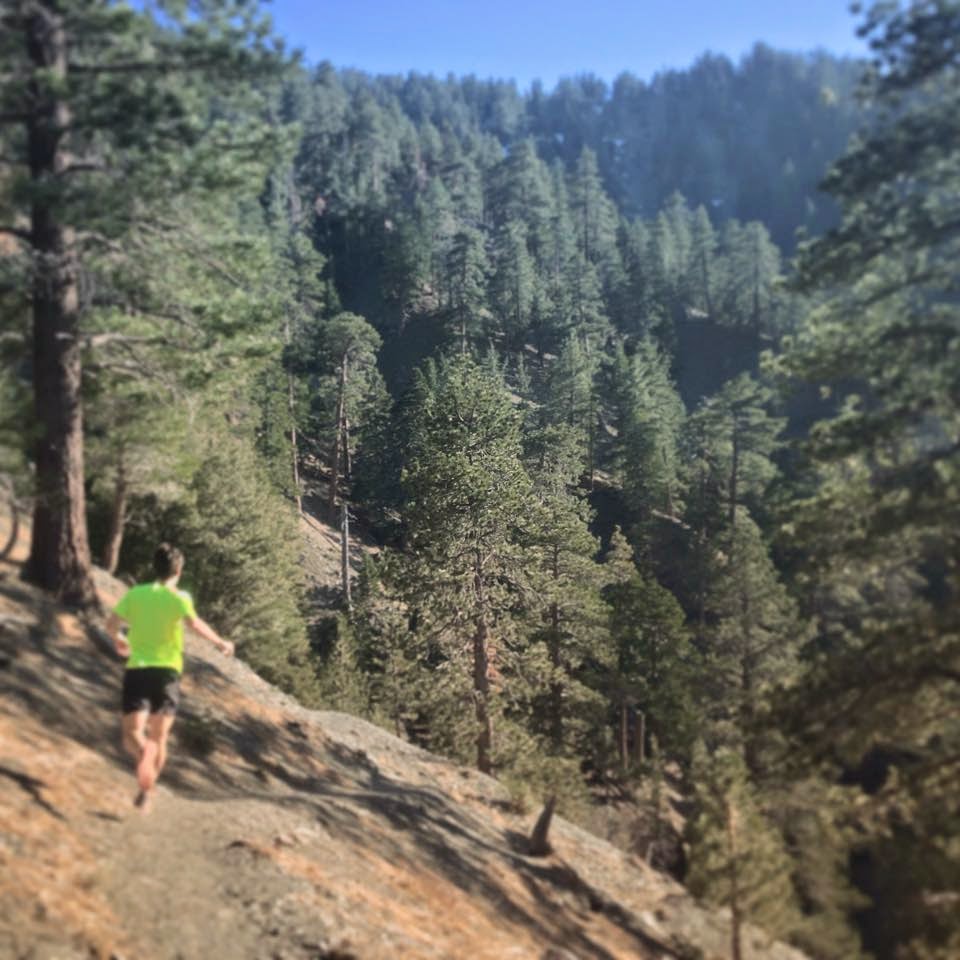 Posted by Dominic Grossman at 9:32 PM