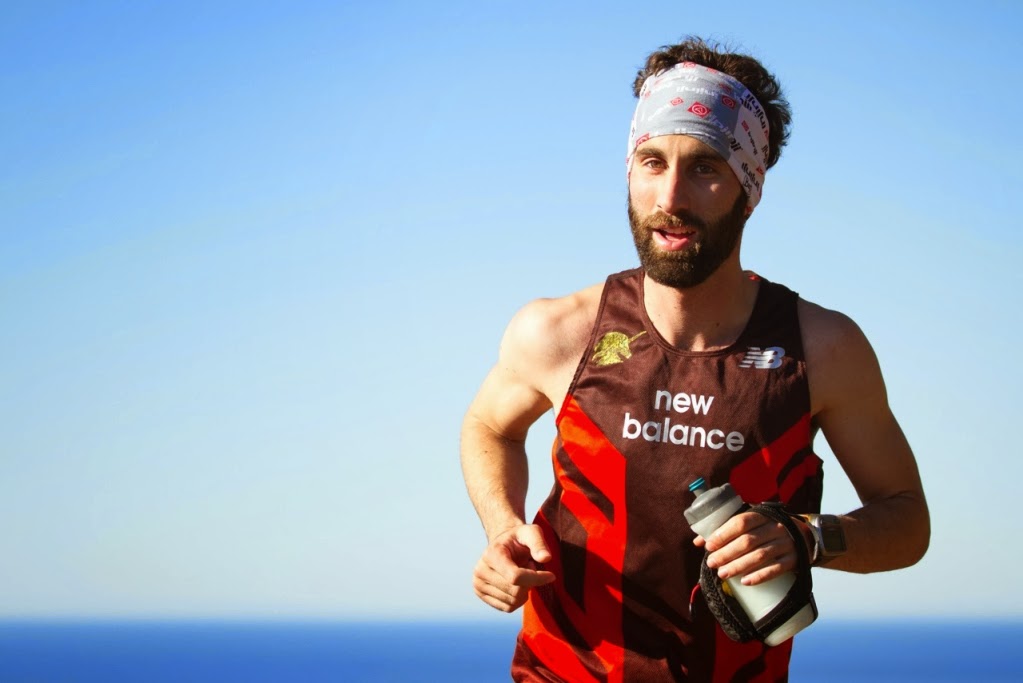 This story starts on Sunday, December 8th, 2013 at San Francisco Running Company. In the back of the store, Scott Wolfe and I were listening to Topher Gaylord's presentation for the Ultra Trail World Tour and after a few minutes, Scott casually asked if I was excited about running Western States in 2014. I muffled a shocked "WHHaaaatttt?" and Scott chuckled realizing that no one had told me that I was going to be running Western States through a sponsor spot from Injinji.

The truth of the matter was that I was not likely to place in the top 3 or 4 spots in the any of the highly competitive Montrail Ultra Cup (MUC) races, and that this was going to be a gracious thank you for the 4 years of pacing I'd done at Western. A few weeks later when I talked to Russell (Injinji), he conceded that it would be unlikely for me to out run a slew of talented runners signed up for Sean O'Brien 50 mile, and that he'd rather me focus for Western States training than peaking too early to win my way in. As luck would have it, I ended up doing just that (unofficially, but more on that later). 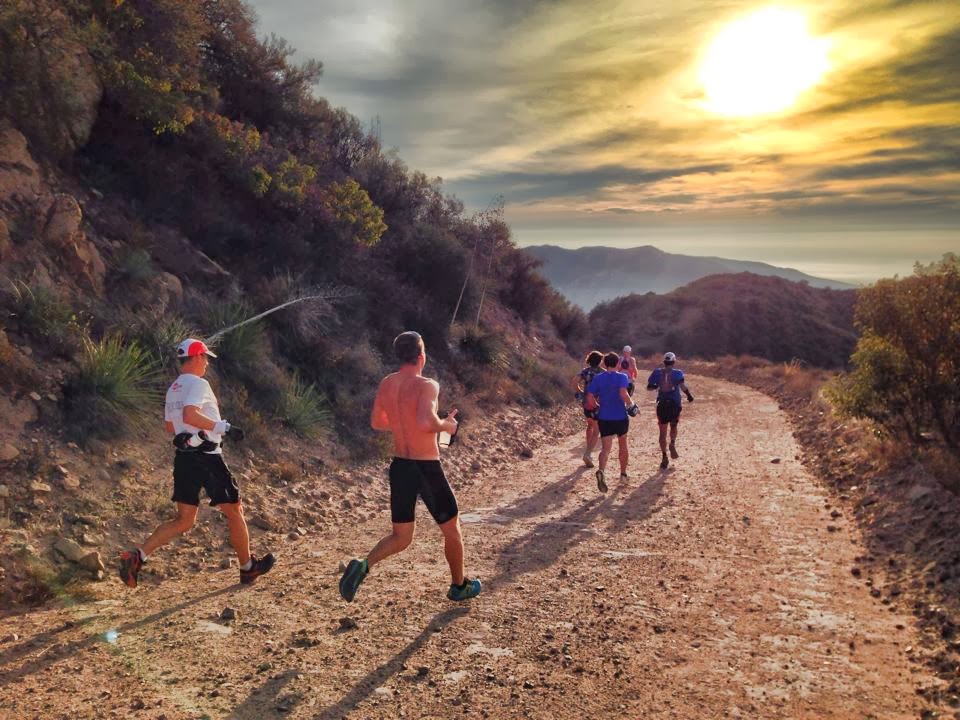 Chris, Jesse, Jorge, Jonathan, and I met with a bunch of runners for a training run in the first week of January to run the 22 mile Kanan-Zuma lollipop loop. I felt good that day, and in my arrogant endorphin high, I told Chris that if I was in 4th, that I would wait for him at the finish line to get him a Western States spot if he was in 5th. It was more of a joke, as I had never beat Chris in a 50 mile before, and I had no reason to believe that I could beat him and a list of other elites growing by the day. However on race day at mile 42, it became less of a joke.

The race started off with freezing temperatures on the east side of the ridge, that quickly turned to 50's as we climbed up out of Piuma. Jokes were exchanged for a mile or so before the pace quickened heading onto the fireroad. Chris Vargo, Mike Aish, Josh Arthur, Mike Wolfe, Dylan Bowman, and Jorge Pacheco floated up along the climb as Chris Price, Jesse, and I settled back and struggled to keep within a couple minutes of the leaders. I couldn't keep up with Chris, and found myself living out my worst fears of getting dropped on the first climb. 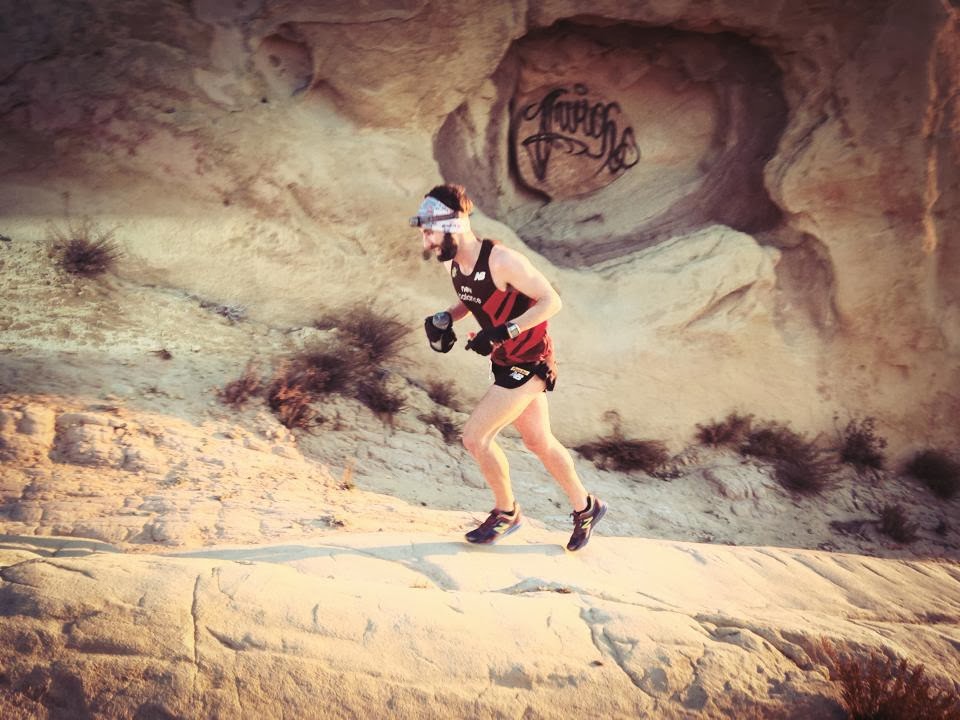 I had done a photo shoot a couple days before for New Balance, and the 50 x 10 yard sprints had left the legs feeling a bit flat. It was frustrating to run alone so early in the race, but at the very least it was a beautiful morning to suffer in the Santa Monica Mountains. The dead feeling persisted from miles 2-22 as I ran along feeling slow and labored while the lead pack was cruising along conservatively. When I left Bonsal at mile 22, I puked, re-affirming my fears that today was not going to be a good day. I had two long climbs in 8 miles to run on one water bottle; yet for some reason I didn't worry about it.

I put my head down and chipped up the long climb up to the fire road, avoiding hiking anything more than a couple yards. I caught Jesse, Jorge, and Josh Arthur who had fallen off the lead pack. On the way down to the bottom of the second climb, I was encouraged by the idea that maybe the lead pack wasn't running so easy, and that maybe I was going to place better than the suggested 9th place on irunfar's race preview. Still, I had a long 20 miles back to the finish, and I had to find a way to speed up and commit to running hard with a sensitive stomach. 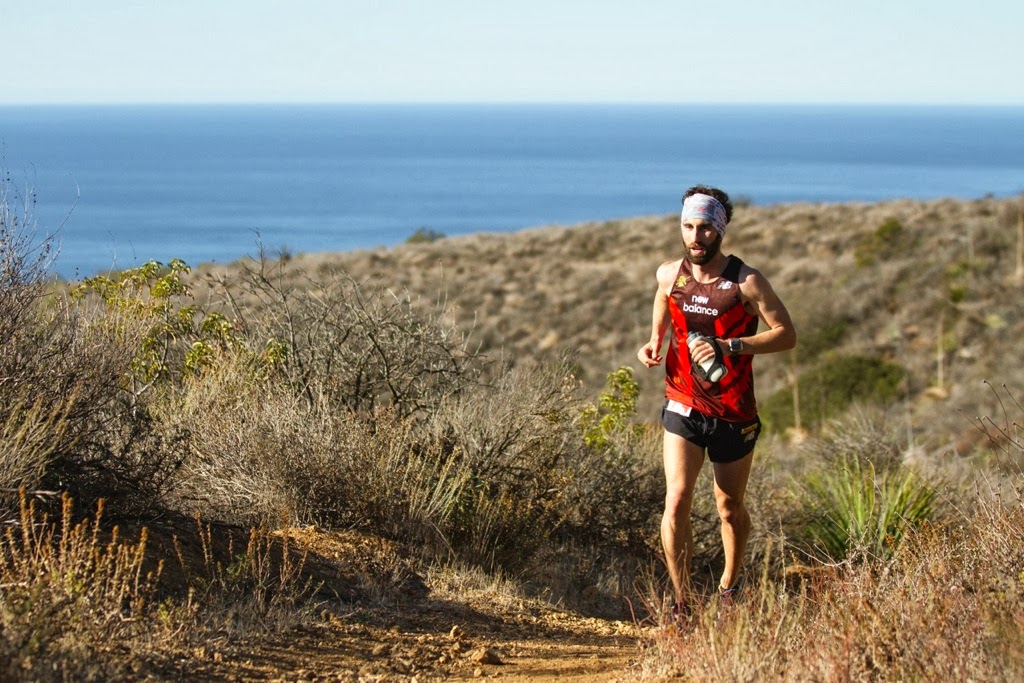 I jogged over Buzzard's Ranch, slowly reeling in William Tarrantino, but I lost time once I crested and felt nauseous again. I stopped and ate some Tums and ran conservatively down to the singletrack at mile 33. As I cruised through the station, I heard a cheer for Mr. Timmy Olson who was running only to get his legs ready for Trans Gran Carnaria. He had already climbed around 30,000ft of vert since Sunday, so the extra 11,000 feet of climbing at Sean O'Brien was supposed to slow him down a bit. I was so shocked and astounded by him running on tired legs and still stalking me like the freak of natures that he is, that it made me want to run hard to at least justify being in his presence.

The race still hadn't turned around for me, and I told him how frustrated I was with it. Timmy suggested that this terrain that was extremely similar to Cal Street and that it was a good place to build some character and push myself hard just for the sake of adding some extra training for Western States. I felt weak and convinced that my legs had nothing left to offer, but I refused to look weak in front of someone that tore through bullshit excuses like a Grizzly. So, I picked up my stride and I started pushing dirt back a little faster. 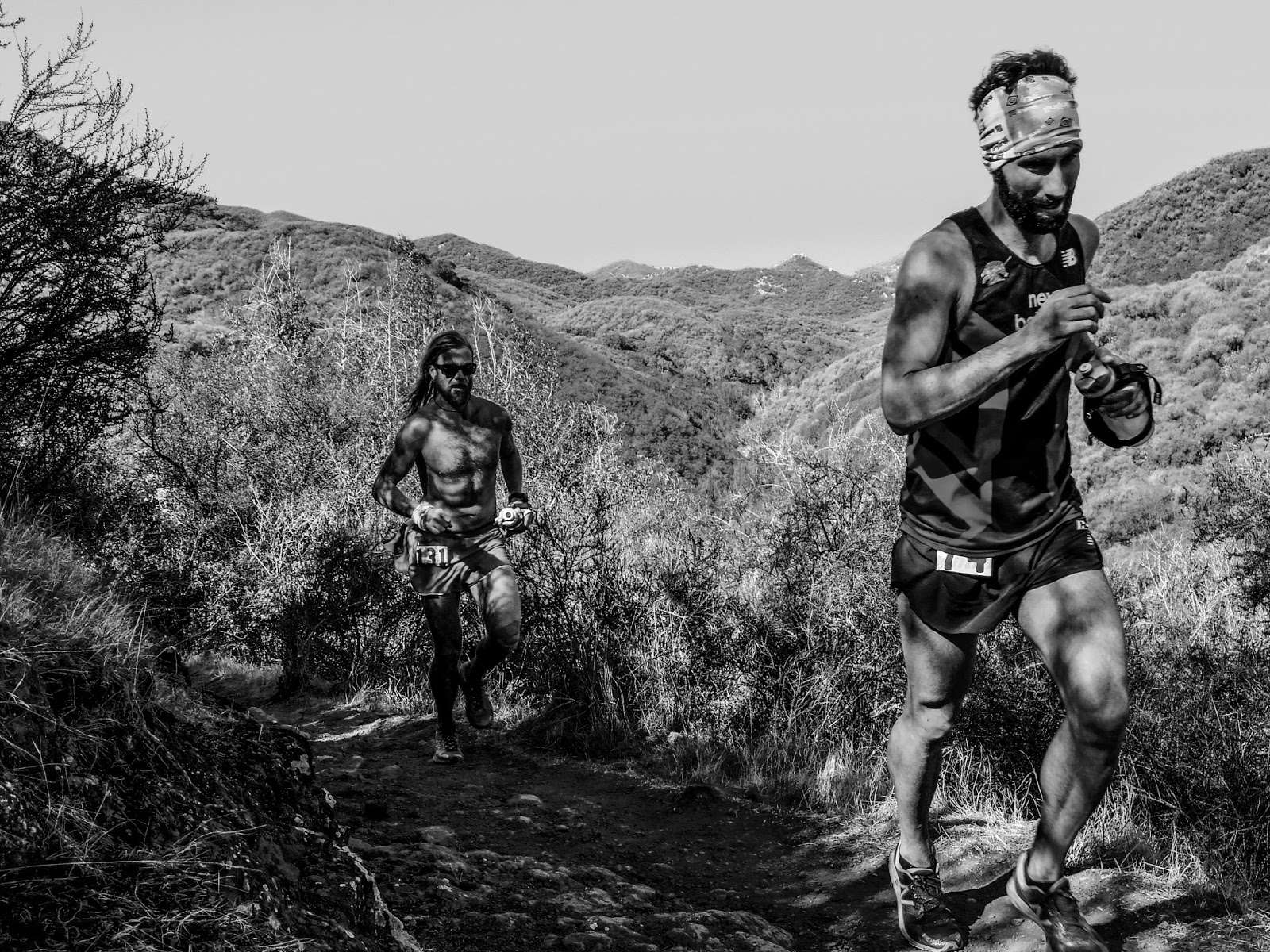 We talked a little bit, but we mostly just focused on committing to that pure ultra running ideal of "running hard when you're tired." We flew into Kanan at mile 36, and saw Vargo in his warm-ups and William in the aid station. Timmy and I quickly refilled, packed gels, drank cola, and left the aid station; 2 places gained in 30 seconds. Timmy hammered like he'd taken in an IV of soda, and I jogged up the hill burping a bit as I settled my stomach. I ran with Jamil who was sick and having a tough day in the 50k. I started to feel much better and I caught back up to Timmy. We rolled through Encinal with reports from Bryon Powell that we were now only 1:50 behind Chris Price who was in the last Western States spot in 4th. Another few cups of soda and some watermelon, and we were off diving into the canyon.

I contemplated settling with 6th for a moment, but I was genuinely having fun, and decided to keep working with Timmy for as long as I could. The climb to Castro Motorway went smooth and as we entered Upper Solstice Canyon, I spotted Chris and let out a yell. The trail was a mix of technical switchbacks and smooth straightaways, and Tim and I flew through the narrow Chaparral Tunnel enjoying the old Chumash trail like it was a proper hunt. 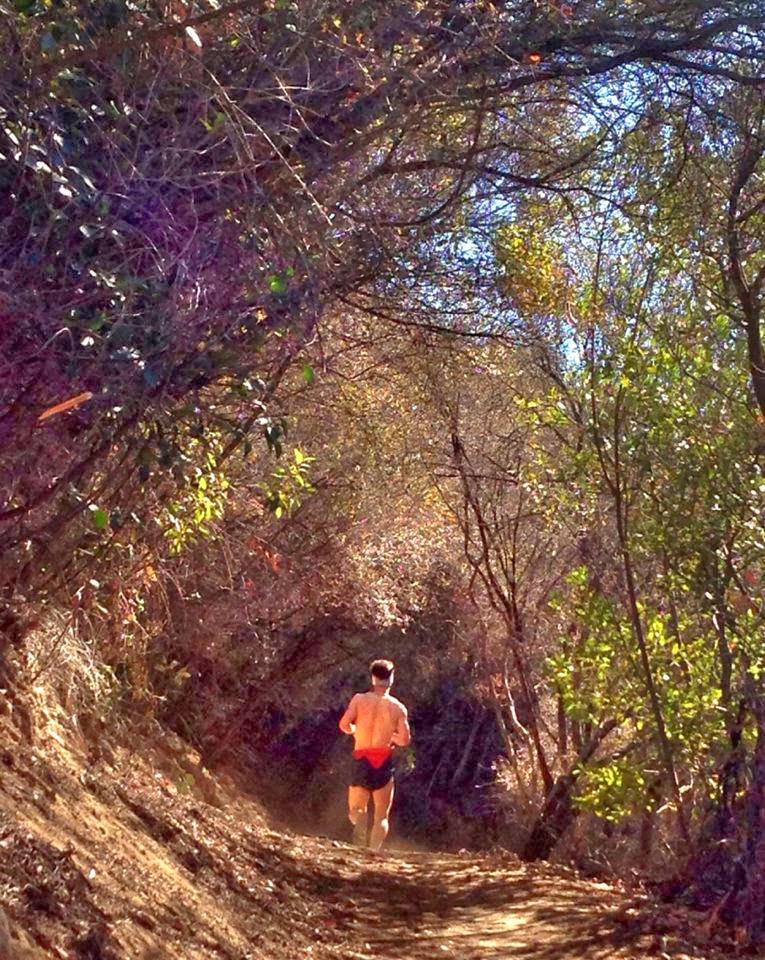 Tim paused to pee, and I continued on reeling in Chris on the douche grade ascent out of the canyon. When I caught up to him, I reassured him that I was not going to Western States without him and I'd wait to cross the finish line for him. He said it wasn't the way he wanted to get into Western States, but he really didn't have a choice as I sang (badly) to him "I'll stand by you, I'll stand by you, won't let nobody hurt you" by the Pretenders.

Timmy, Chris, and I came through Coral Canyon together at mile 43. The long downhill still was a little less than 3 miles away, and I tried to pull Chris along, but he didn't want anymore singing of the Pretenders. I ran ahead with Tim who was still enjoying being exhausted and hammering. We eventually caught up to Krista and Bob who were finishing up the 50k. Timmy elected to finish with the family, and I elected to run a little ahead of Chris to make sure that he didn't let William catch up. We met up on the downhill, and we worked together to click off some 6's into Piuma. Cruising past Jayme, he let out a "hell yeah, SoCal!!" and I felt a big surge of pride for all the hard work Chris and I had done in the past few years, manifesting in this moment of endurance at mile 47.

I pulled us along over the last tiny prison camp hill, and onto the road. We ran the last third of a mile side by side, and I paused a few feet from the line to give Chris a second to notch 4th place and a ticket to the big dance in Squaw with Jesse and I. 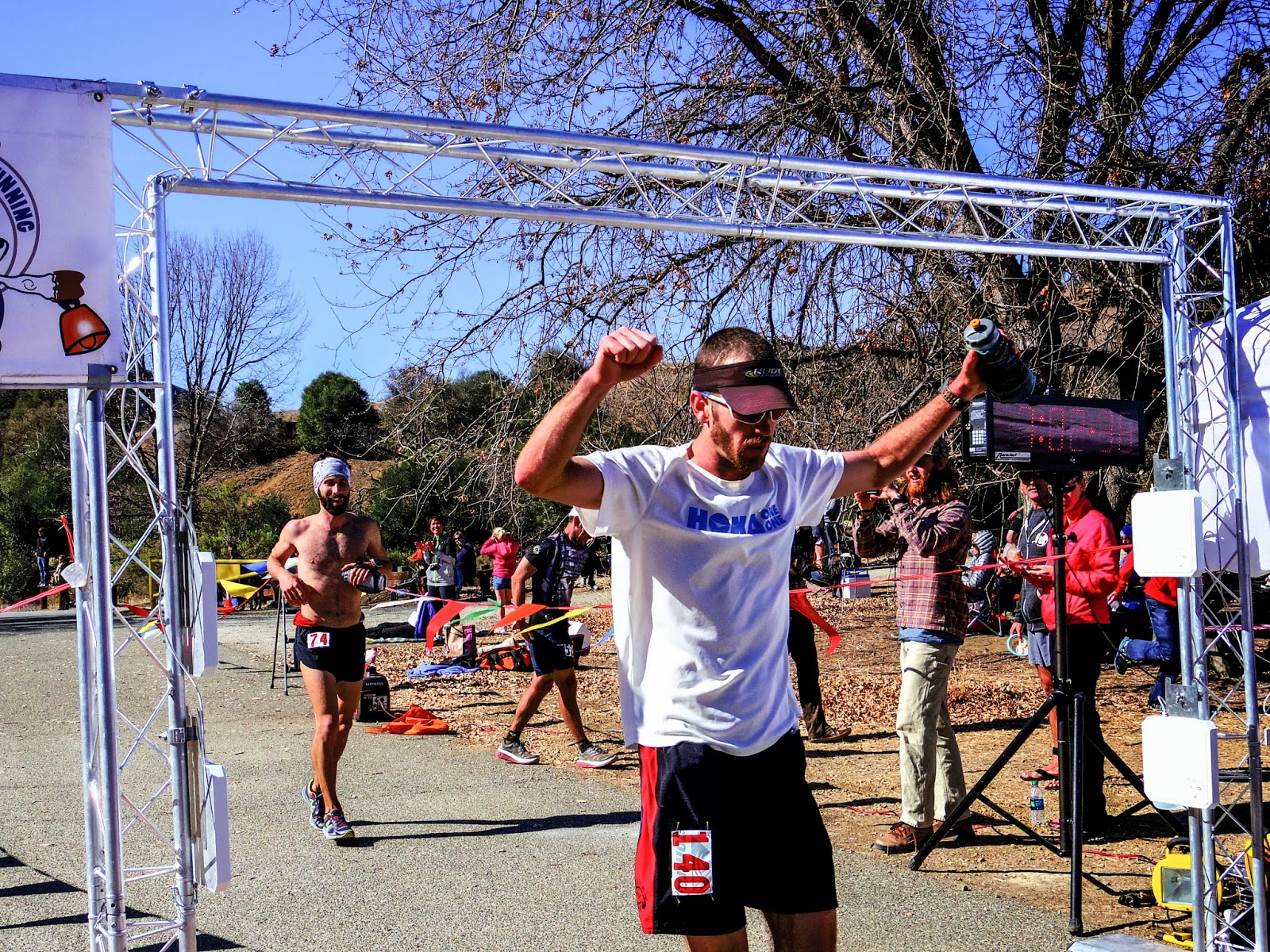 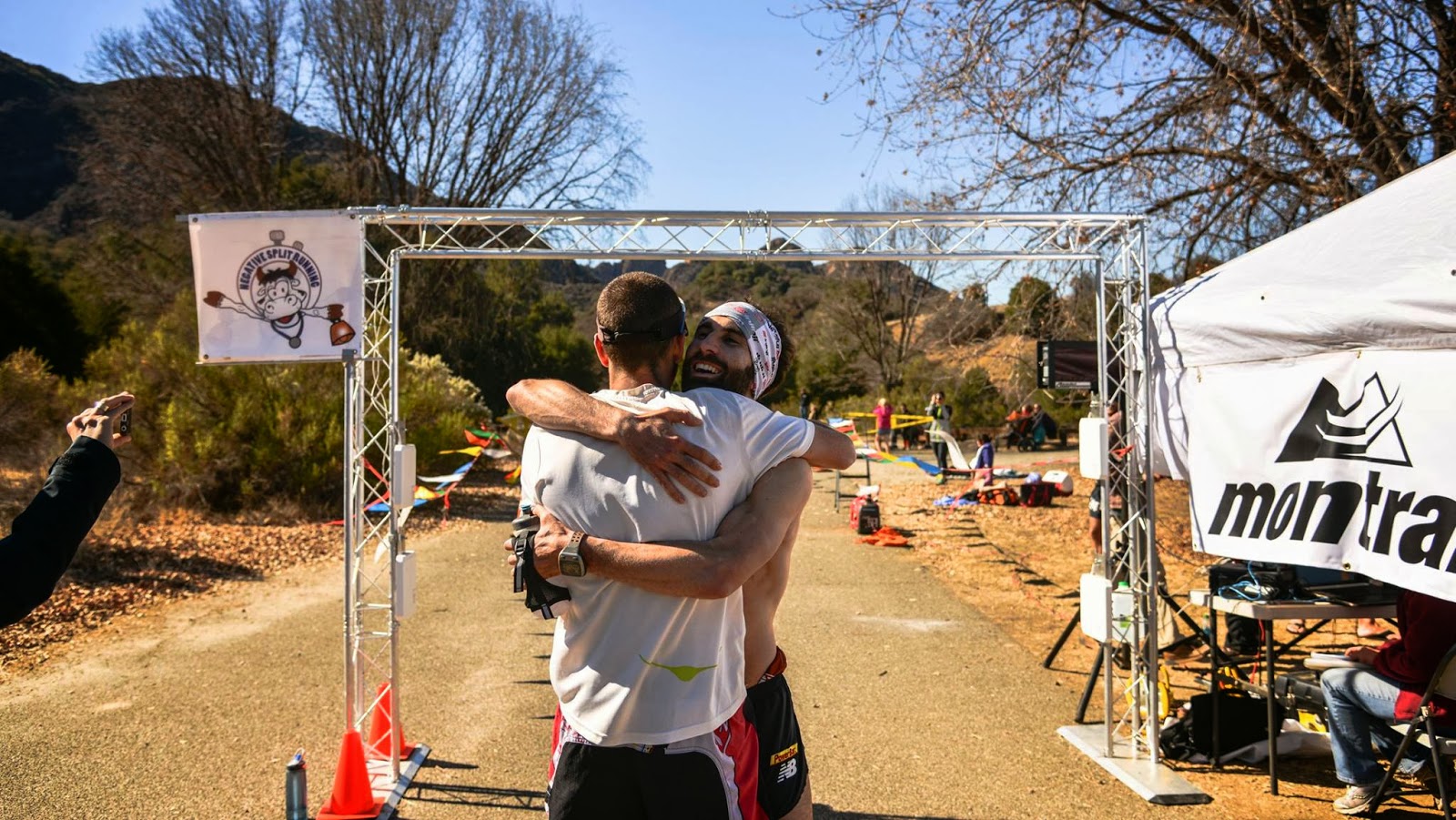 The day was about as good of a day as I could have hoped for. I think my fitness was around 6:45 for an A+ race. However, after all the throwing up/nausea, flat legs, etc. etc. getting to share that WS qualifier with Chris and nab the 4th/5th spots was really special. Both of us can go to Squaw and know that we belong there, that we truly are some of the best runners in the country, and that sunny Southern California is rising up on the national ultra stage. 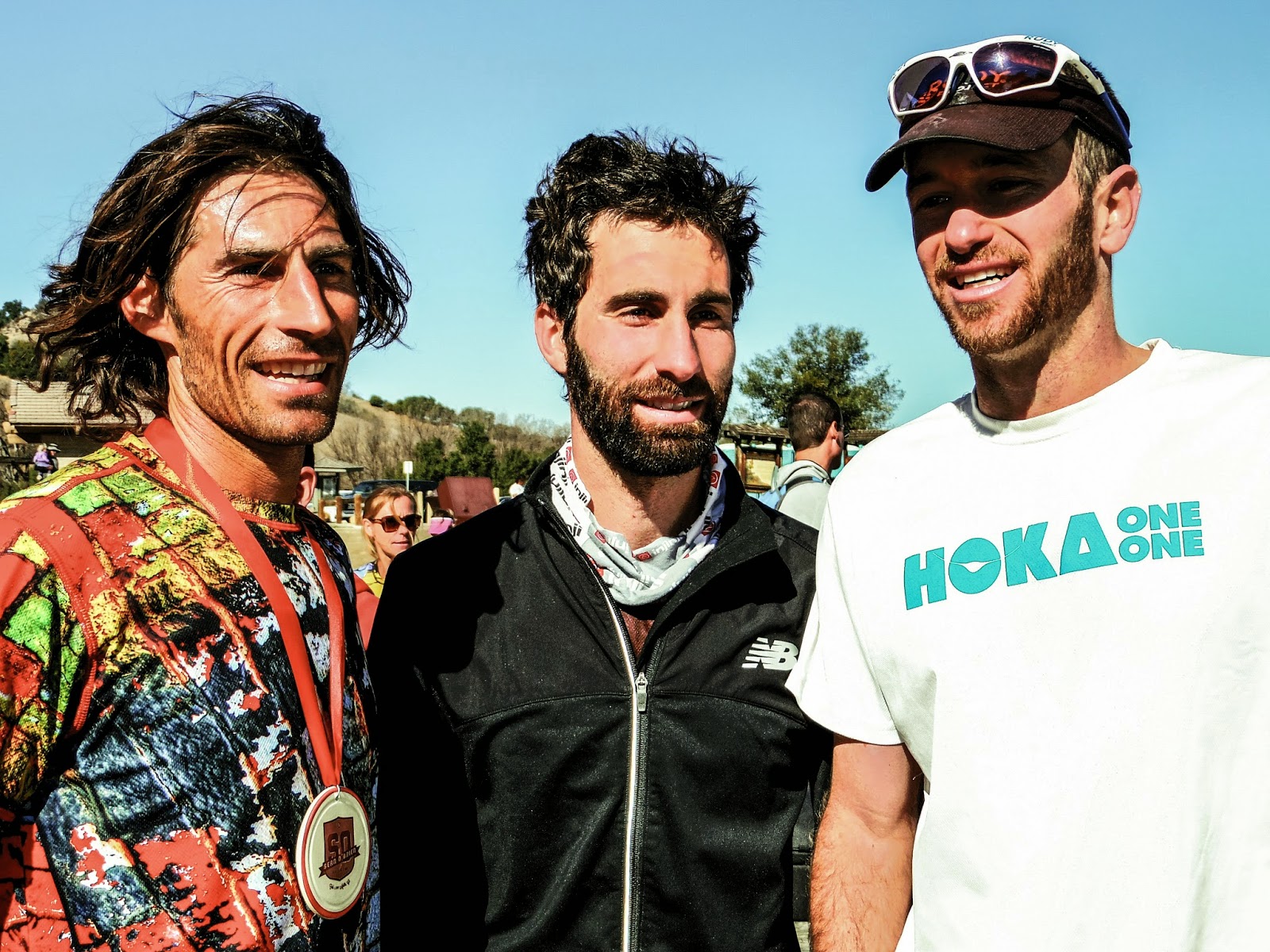 Posted by Dominic Grossman at 11:57 PM

That was an awesome recap, and an even better show of character. You are a class act Dom. I thought you ran a smart race, but now I see you just ran a gusty race. NICE JOB! Cant wait so sing and DANCE with you and Prizzle at States.

I have to admit I was slightly distraught to see you pass me. I tried so hard to catch you guys, but by that time I was cramping hard. 'grats on a strong finish.

Quick question: where did you find the pictures from the course?

Thanks Jesse, I think you're the nicest guy in the whole basket of kittens club.

William, good racing out there, that was a solid performance on that course. I just got these pictures from my Katie, Jayme, Monica, and Ivan on fb and e-mail.