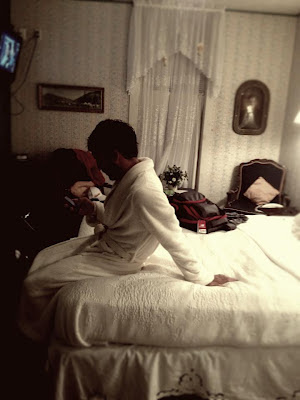 My bed felt too warm, too soft, too comfortable for my mind to rest. I was about to be out in the San Juans for at least an entire day and night, and the quaint bed and breakfast I was staying at in Silverton seemed grossly inappropriate. My mind raced through the course several times and finally after the 30 or 40th mental loop, the thoughts of great distance finally wore my mind out. 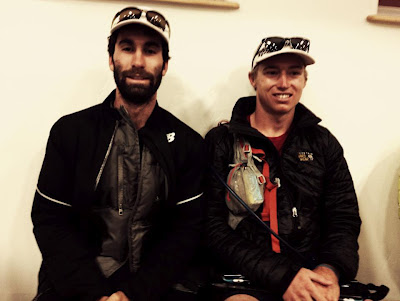 Race morning came and I was pinching myself in the gym. It’s 100 miles, it’s 11 passes, it’s here and I finally can get started and let my mind work down the challenge with my legs. We set off at 6am sharp and I found myself leading the pedestrian jog over to cross Mineral Creek. Tony told me I was going way to fast and the Arizonans laughed a bit, but I was just sticking to my plan of taking advantage of the low lying pockets of oxygen on the course. As we started climbing Putnam, I promptly settled into a conservative jog/hike. I had hoped that the 2 weeks of altitude exposure would have spurred some extra comfort in my body but things felt labored. Diana Finkle, Darcy Africa and 10 other guys passing me took me off guard. Was this hiking or running terrain? Probably running if they were, but when do sea level lungs acclimate to this altitude (if ever)?

I ate gels and took my time trying to stay comfortable but the excitement of the race was getting to me in a negative way. The descent back down to KT felt awesome yet still more labored than a week ago. My time into KT of 2:38 was decent, but this was a fast year and I was already 14 minutes back on the leaders and not feeling any stronger. I had a cross roads of whether to fight harder for a more respectable finish or to ease back and ensure a finish in general. The decision on any other course would have been the earlier, but on this day in a race that I was inexplicably lucky to be in, I chose the later. 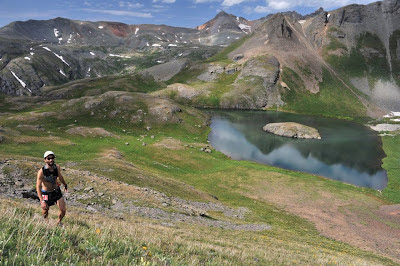 Was I as prepared as I needed to be to compete? No, altitude is altitude and I had spent the last 25 years of my life as sea level, pushing up to 10,000ft on the weekends for the past year. This was a race that demanded 13,000-14,000ft abilities, and I just didn’t have a way to fake it. In hindsight, an altitude tent wouldn’t have hurt, but it was too late for that. As I struggled and suffered and cursed up Grant-Swamp Pass, I gave into the immensity of the course, and resolved to survive at all costs for the sake of holding myself accountable for my training mistakes. It wasn’t easy getting passed by men double my age, but I understood where I stood on the course. I was a rookie, and I had a lot to learn throughout the day if I ever wanted to come back and race it properly. So I learned on the fly how to optimize a 100 mile day at altitude. 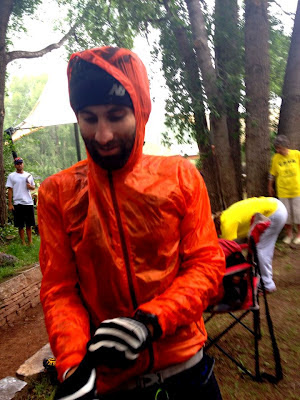 So, with these tools I gathered myself and became methodical. “What’s the weather up ahead?” “When was my last gel?” “Should I start using more caffeine?” “Let’s eat another donut and walk it off out of the aid station." "Is there good trail ahead? Let’s fuel up and prepare to run it.” 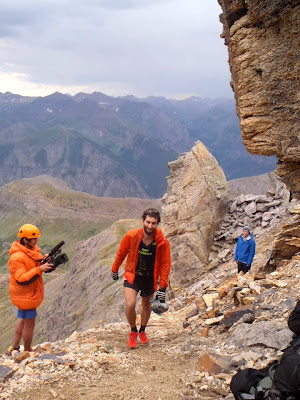 I wasn’t very high in the standings coming in off the descent down Camp Bird Road, a solid 2 hours behind the leaders at Ouray, but my mind was ready for the night. I had envisioned reaching Ouray by 5 PM at the latest, but I left at 5:28 PM. I fueled up and got ready to tackle Bear Creek with my pacer Eli. 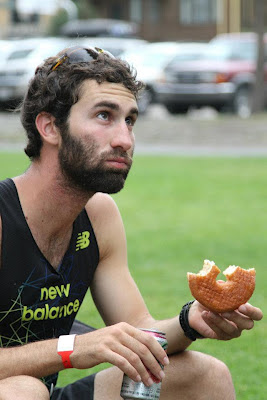 In Ouray having sugar with a side of sugar, Photo: John Medinger 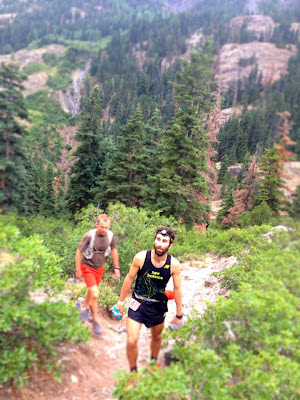 I passed one other runner, and didn’t know it, but on the way to Engineer Pass, Eli and I were beating splits of much better runners ahead of me. As I pushed through the night over Handies, the altitude robbed me of time again, but I moved safely through the freezing windstorm and technical loose rock, and left enough in my legs and lungs for a strong surge to the finish. 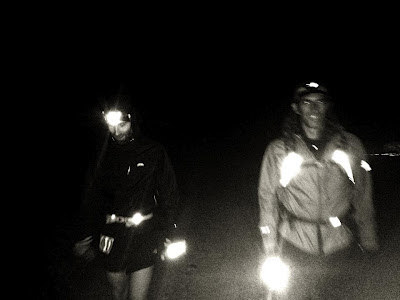 Following Jamil into the dark at Grouse, Photo: KD 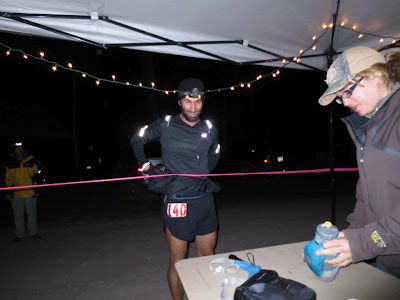 My Sherman-Poll Creek split of 3:02 was not terribly fast, but quicker than a 5-6 people ahead of me. I was wasting a lot of time in aid stations, but on the trail I was making good time and moving with a good attitude and energy. I didn’t know how well we were really doing because we were completely alone from Handies to Cunningham. I had a shot at sub 30 hours for a few moments, but I unfortunately had one more costly lesson to learn. 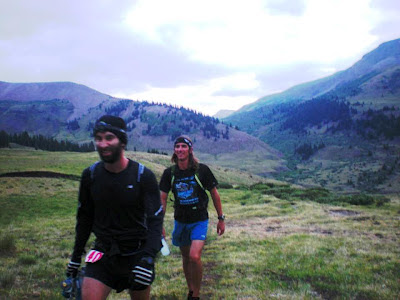 The human body subsists day to day on a blend of carbs, fats, and proteins. In a race, the most efficient fuel is carbs and most competitive runners focus solely on carbs and electrolytes. However, there are limits as to what the body can do on 6,500 calories derived almost solely from 1550 grams of carbs. The important amino acids found in proteins fuel certain metabolizing cells in the body and after too many carbs in a row, these systems shut off carbohydrate delivery to the muscles. To put this simply, your legs stop working if you don't include some protein. At 7AM in Poll Creek, my legs began shutting down. Jamil and I ate some pumpkin pie at Maggie Gulch aid station and tried to set out over to Cranby Mountain with a last ditch effort to surge home for a sub 30 hour finish. The result was me crawling on all fours as Jamil watched amused from the singletrack.
I started to lose my mind at the thought of crawling 2700ft. up Little-Giant on all fours, but fortunately Jamil had some emergency protein bars. I scarfed a 10g bar down and then another and began to feel strength in my legs again. I wasn’t terribly fast up or down Green Mountain on account of the 90 miles already on my legs, but I found myself jogging into Cunningham surprisingly capable of finishing under 31 hours. It was not going to be cushy though as I had less than 3 hours (2:54 to be exact) to do it, but I had faith in my legs and my mind. This was what I had been doing for the last 30 hours, so I set off with Katie to climb and descend as best as I could one more time. 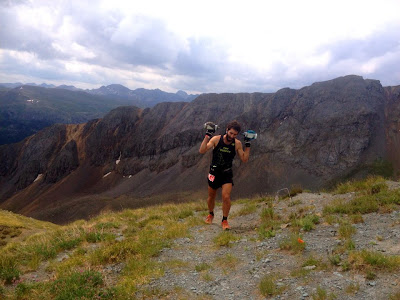 The hike up Little-Giants with Katie was incredibly difficult, but I kept the faith that I could salvage a good time if I just kept moving. Finally the pass arrived and I half celebrated knowing I still had a 3700ft descent to absorb and a traverse paralleling the Animas River that had to be run. So Katie and I set off with a determined stride and peeled off mile by mile until I saw Kendall Mountain Rec Center at 12:43 PM. 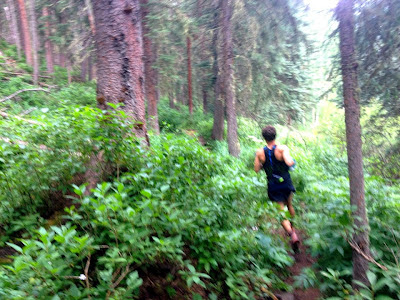 Legs inexplicably turning over with 2mi to go, Photo: KD

I knew I had done it, and the feelings of gratification and accomplishment overwhelmed me. I started grinning uncontrollably and letting out whoops and yells. The time wasn’t going to be as fast as I wanted but I had found ways all day to avoid a much slower time. I kissed the rock at 12:46 PM Saturday afternoon and imprinted the moment in my memory for life. 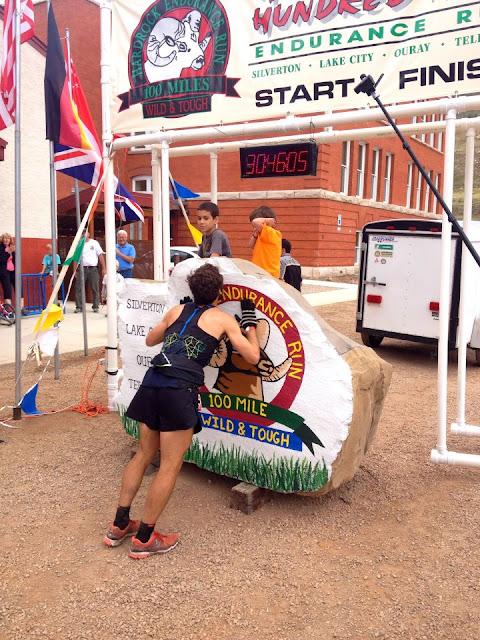 I was the first Californian by over 5 hours, and the results show a large contingent of Coloradans and Utes up front which shows how much the race favored the locals (past and present (i.e. Hal). Mountain running certainly wasn’t (and still isn’t) something I consider myself talented at, but I do believe that I’ve achieved some competency in completing Hardrock in the time that I did. I know I’ll be back at the race someday, and I’ll be able to train right for a better time. 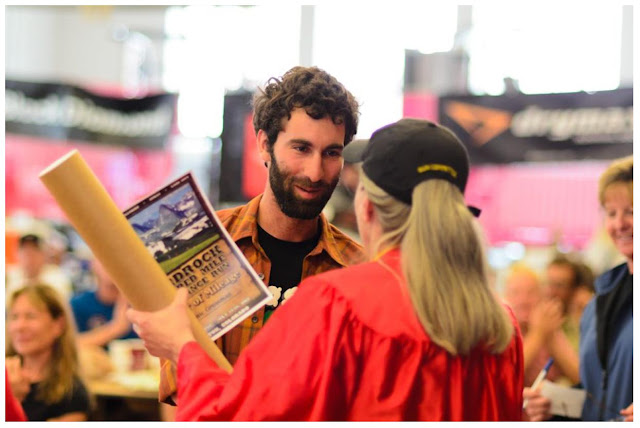 To complete this race report with only commentary on my race would be give a tiny picture of my Hardrock experience. A good part of my time in Silverton was spent hanging out with my adopted family of Peter, Patti, Amalia, Nick, Jamil, Justin, Rachel, Chris, Eli, Katie, Dakota, Joe, Billy, James, and Rodger. The days spent with these people were really special. The San Juans made all our souls breathe faster and harder, and the experience was special because it was shared with other people excited about running in the mountains. The terrain is astoundingly beautiful and vast, and there is no limit to adventure in the San Juans. When I take pictures and write about it, I feel guilty knowing that I can never truly express the effect they have on you. The only solution is to go out there and see them for yourself.

Finally, I have to thank my amazing crew. Though they didn't have much access to me, they made the most of it. Justin randomnly chased be with a nightstick in Ouray, Rachel cheered and took pictures of said nonsense, James was a source of positivity, Katie kept all my gear together and paced me the last nine miles, Eli helped me surge up Bear Creek, and Jamil hung out with me for 12 hours from Grouse to Cunningham staying by my side through thick and thin. I owe my race to them, and to everyone that helped me along the way this year. Training runs with Jorge, Chris, Eric, and Jesse; nice cooks that gave me extra food; my work for giving me time off; and everyone that cheered me on digitally/metaphysically through the night, I felt your love. Thank you.

The String Quartet's tributes to Coheed and Cambria and Fallout Boy were some of my most played songs during the race. Fitting for the dramatic terrain
Posted by Dominic Grossman at 12:31 PM

Nice reflections Dominic! So glad you held on for a gutsy finish in a great time really. Enjoy replaying that 100 mile journey in your dreams! Hope to see you on trail soon. Take care, Steven

Congrats on toughing out a respectable time at a very tough race. Never easy, but always rewarding.