Leona Divide was not the most competitive race I’ve ever been in, but I still a very exciting event to be apart of. I’d worked at aid stations for two years before, and I’d seen how fast and enjoyable the course is on training runs. I’d also been injured for the first big race of the year (Ray Miller) and had semi-decent race on a half-training load at the second (Old Goats). The irunfar preview of the field included some really quick runners from road and mountain background and I knew for sure that a low six hour time would be required.

I laced up the RC1400’s and with the perception that the course wasn’t technical enough to necessitate the 110’s and the 1400’s would help me make the most of the gradual downhills. In the days before I’d felt more hungry than usual and set about eating bowl after bowl of pasta. I felt like my input was greater than my output, so I tried to eat some greens and probiotics to loosen things up. Unfortunately things didn’t quite settle in time for the race.

The first climb was steady and my legs felt like they were warming up as usual. However when the incline started to decrease, I didn’t feel the usual speedy pop that comes when I level out. Instead I felt like I was still climbing and I watched the lead pack tear off down the trail.
I fell back and talked with Scott Jaime a bit, and tried to put my mind at ease. A few short downhills gave me a chance to open up my stride, but on every uphill I felt weak and underpowered. Never the less we made 8 miles in :56 and I took down my first powergel. I knew it was going to be a long day and joked with Scott about throwing up, and he reassured me my day would come around once I experienced “reguritas euphorias.” 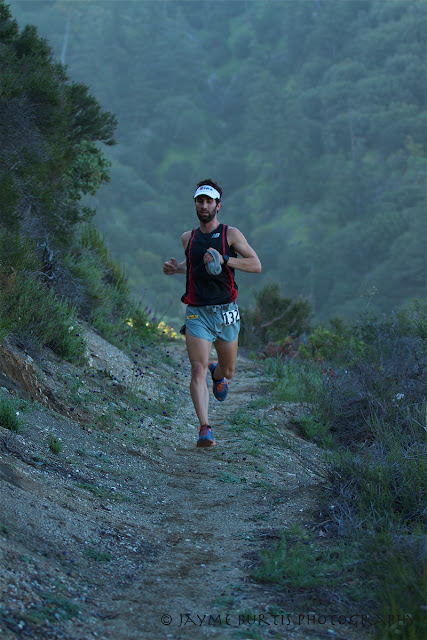 Down to the Road. Photo: Jayme Burtis

Scott and I pushed hard down to the road crossing at mile 16 in 1:55 and found ourselves already 8 minutes off the leaders. I thought my chances of finishing in the top 10 were just about gone as I was feeling even weaker preparing to go into the climb up to the ridge. Scott passed me and I was alone jogging into the mile 20 aid station on powerless legs. As soon as I looked at the food table I announced I was going to throw up. They directed me to some grass and I wretched my stomach out for a good 60 seconds. “Reguritas Euphorias” tears streamed down my face and I got up and drank some Coke and headed out towards the Coyotes at mile 23.7.

I took down more powergel and tried to build back some strength in my legs, but the resurgence was not going to be immediate. The 3.7 miles of windy snaking singletrack dragged on and on and I began to question if I even was a competitive runner. Was I worthy of any sponsor? Was my training a sham? The pity party continued up into the aid station but the aggregate absurdity of the coyotes in 80’s garb put a smile on my face for a moment. Words of encouragement from Jimmy and Kate bounced off my ears and I put my head down and tried to get in a rhythm out of the aid station. 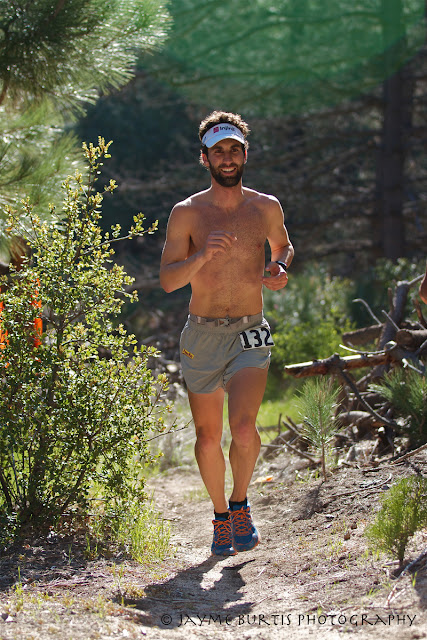 Jayme and Jesse saw me out of the aid station and goaded me on down the trail. Another mile passed and I still felt weak and fragile. Another runner passed me. Finally the singletrack ended and I was greeted with a long downhill fireroad to the out and back. 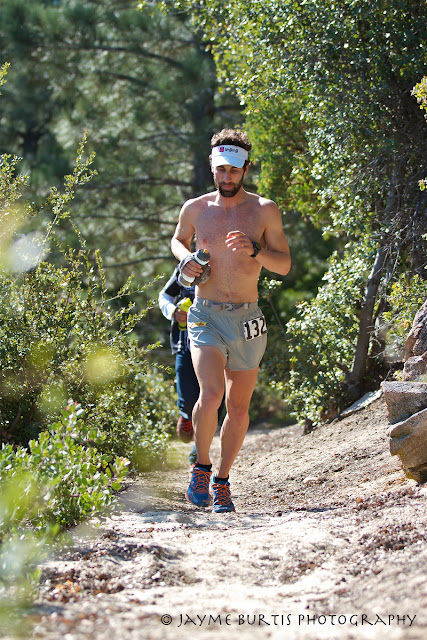 As I trotted down the hill I saw Dylon chasing down Jason Wolfe and encouraged him to keep pushing up the hill. More and more battles were unfolding: Tim Olsen vs. Jorge Maravilla, Yassine Dibuon vs. Jorge Pachecho, Jamil Coury vs. Chikara Onime. As I neared the turn around I saw my dance partner, Scott Jaime. There were twelve men ahead of me, and two re-inspired legs below me.

I was going light with one handheld and knew I had to refuel and top off my internal reserves for the long exposed climb back to the singletrack. I set off and felt the sudden pangs of being hunted as I saw Heather Fuhr and Megan Laib roaring downhill. Luckily my legs felt like they were finally ready to race after 30 miles and I earnestly put them to good use catching up to Scott Jaime 3/4th the way up the climb. “Cor-oooona Lights at the finish for youuu!” I howled out. Scott’s calves were giving out (an injury I know well from February) and in hindsight I immensely regret taunting one of Colorado’s best craft beersmen, and former Hardrock champions. I’m sure he could easily have a chance to taunt me in July in the San Juans.

As I reached the singletrack Paulette gave me the go ahead to chase down her statesmen James Bonnet and Jamil Coury. Both had looked strong the last time I saw them, and I knew they were some of the toughest people to chase down in a 50 mile race. I caught James a mile out of 36 and gave him most of my water as he was cramping and out of water. In hindsight, I don’t know how I made it back 6 miles in the sun on only 12 oz, but it worked out just right.

The coyote clan was in full hi-octane party mode and I was hugged, slapped, yelled at, pushed, and topped off in a psychotic 30 seconds. I worked hard to push through the windy 3.7 miles back to mile 39, but I couldn’t pick Jamil out of the oncoming 50 mile runners. The aid station workers said the next runner was a good 3-4 minutes ahead. More consistent forward motion and not losing any more of my stomach’s contents, and I was back to the top of the hill above the road and flew down through the oven emptying my bottle just as I hit the bottom. I’d been cutting into Jamil’s lead for the last 11 miles, but he was holding out just enough energy for a powerful finish. 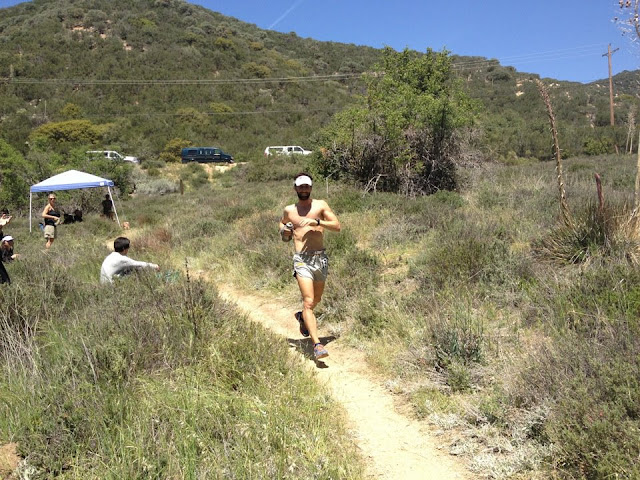 Mile 43. Photo: Katie DeSplinter﻿
﻿
The last 7 miles featured a gentle three mile climb over 1000 ft. In the bottom of the climb, the heat was stifling. Once again I’d trusted my fate to one water bottle. Katie told me Jamil was just three minutes ahead, but he had looked strong. I loudly lamented my situation to everyone within 50 yards of me: I’d puked and fought hard for 43 miles and now it was up to one last hill with just barely enough real estate to catch up if I ran as hard as possible. Logically, I didn’t think I’d catch him, I doubted I’d crack top ten, and I was almost absolutely sure I wouldn’t crack 7 hours, but spiritually, I felt like maybe this was a good time to be illogical.

I started chipping up the canyon passing more 50k runners and started to notice two much more slender runners up ahead: Chikara and Steven Moore. Neither was willing to stop running, but neither were running very quickly on account of the previous 44 miles and dizzying heat. This was a game of chicken vs. each other and the heat. Keep redlining and risk blowing up or ease off and wait for the downhill to attack.

Steven had looked strong on the downhills earlier in the day, so I knew I had no time to waste if I wanted to pass them. I sat on Chikara for a moment before he let me pass and then I moved up to sit on Steven. I was steadily pushing him and increasing the gap on Chikara. He was flush red from the heat and for the moment I was just a tiny bit more efficient. He let me pass after a minute and I resolutely focused on keeping my cadence up to take advantage of any walk breaks he took. I ran almost every step to the aid station and got 10oz of water and was out just in time to see him pulling in. Our eyes met and my heart jumped.

The fireroad gradually lead up for a mile before the 2 mile descent to the finish. I could sense my lead slowly growing, and I threw down everything I could to use the most of the uphill. Finally it started to level off and I turned around to check. I had at least a :45 second lead and tried to extend my legs to attack the downhill.

A sharp pain in my calf froze me for a moment. I sighed and slurped down one last powergel and hoped enough sodium in the gel would stave off any last second crampfest. I let gravity pull me around each side of the ridge until I crested the Leona Valley side for good. I checked the time of day and estimated distances left to the finish. Was it another half-mile or mile? Was I going 6:30 or 6:00 pace? It was all inconsequential; all that mattered was that I gave it my all. 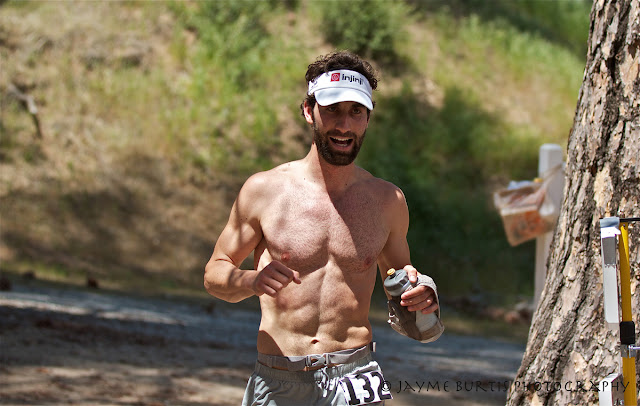 I let out a caw and Micheal Chamoun was cheering telling me I had 60 seconds to break 7:00. I was confused where I was, but quickly relieved to see the finish line and cross it 6:57:58, just 67 seconds back of Jamil.


I’d gone in with high expectations of myself of being capable of a sub 6:30, maybe sub 6:20 race. I blew it on nutrition and suffered for it, but in the end I still got the competition that I came for. I got to race against the nation’s best in my backyard, and I (along with 99% of the field) received a lesson on how lethal mountain runners are in the open trail. 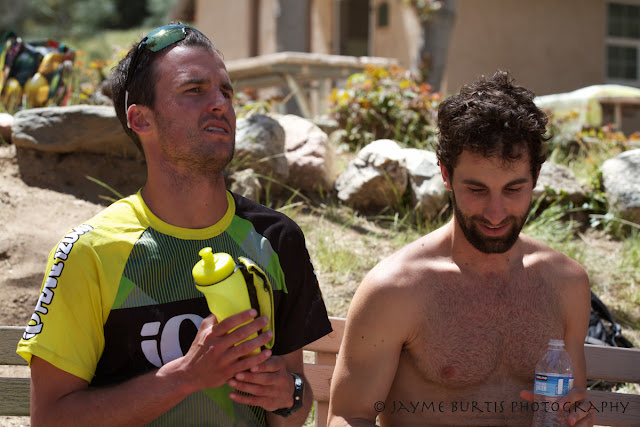 Dylon put down an amazing performance and demonstrated the high aerobic and cardiac capacity that he had honed in Aspen, and how effective he was on the gentle trails of Leona Divide. I’m more resolute than ever about my training for Hardrock and my eventual return to 50 mile competition this fall/winter. I’m certain Keira’s RD-ing was up to par with other Montrail Cup events, and this will definitely be on the schedule next year.. Which will give me time to figure out how I’ll crack 6:00…

The legs don't feel too bad at all. I actually did some steep stuff up the Lake firebreak sunday with Jorge, Katie, and Mari and ran down Lake pretty well. Perhaps I didn't race hard enough.

Way to keep plugging away and finishing strong. Looking forward to seeing you perform in real mountains (ie San Juans).

I had the same stomach issues at Potowatomi 50 a few weeks back. felt like my food was just filling up and not going anywhere. Never did work its way out during the race.