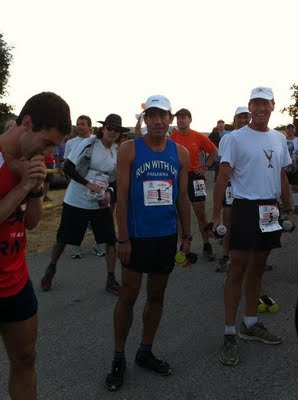 Bulldog 50k went “alright” running 4:08 in 100 degree heat. I ran 3:59 two years ago with a bit cooler temperatures and fresher legs, but alas the conditions were what they were on Saturday.

Going in, I knew I wasn’t anywhere close back to the level I was at before AC, and it seemed like a perfect storm of heat and weak legs was brewing for my body (and another of a different variety on the east coast). I tried to hit similar pre-AC workouts, but the effort level felt a lot higher and I never got through too many good runs. Also, I spent the Saturday before run-hiking with KD up and down San Gorgonio for 10 hours which took a little out of my legs. I spent two or three sessions in the Sauna, but that wasn’t quite enough for how rough it got for me at mile 24. Excuses and complaints about the weather aside, this race was what I needed to get psyched for the fall. 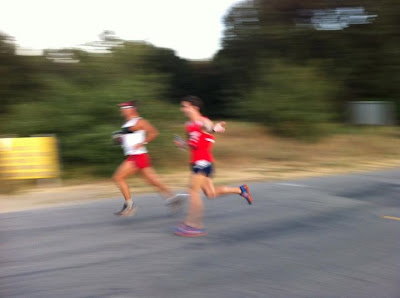 The first lap started off with a few quick miles with Kevin Dean through the flat and pre-quel to Bulldog that I seem to always enjoy. It’s almost like a carefree jog in a city park before you remember the climb waiting for you just past the singletrack. Kevin kept flying and soon I settled back on the climb with Jorge and Jesse. 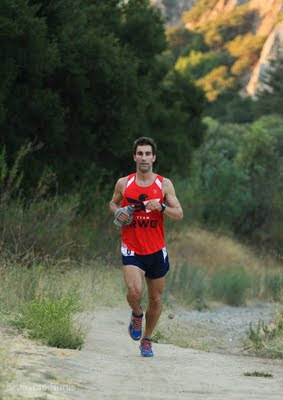 The three of us worked together for a little bit, but my legs felt stiff and weak, and about halfway up the climb Jorge and Jesse put a 2-3 minute lead on me. I knew the pace wasn’t too fast, and I felt bad about not running with Jorge. I considered for a bit whether the race was worth finishing, as I was feeling pretty sluggish and sore for mile 8 in a 50k. After a few minutes of introspection as I clipped along the ridge, I made up my mind that this race was important: important to work through, important to instill some humility, important to develop some character, important to finish in respect of a 100 mile race in Europe going on at the same time.. Whether I found a way to catch up or I got my ego checked, this challenge was worthwhile any way you looked at it. 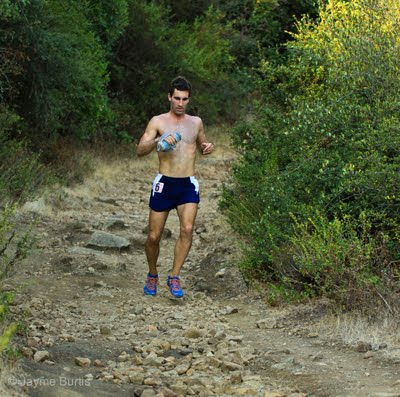 I let my body figure out it’s own pace and it worked out alright running 1:55 the first loop, just 5 minutes behind the leaders. I began the second loop with a salt stick and another gel and began to feel a bit better as I caught Kevin, and then began moving up on Jesse who I could see on the rollers to the first aid station 1/3rd of the way up Bulldog. The temperatures were starting to feel like the promised 90-100+ degrees in sections and I kept a steady rhythm of dousing water in my hair and drinking some more. Eventually I caught Jesse and went to work focusing on keeping my rhythm up Bulldog as I passed 25k runners. 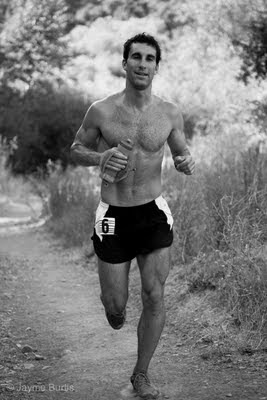 With about 1 mile to go up Bulldog Motorway, I saw Pedro and Natalie and got a boost of energy as they cheered me on and told me Jorge was close. Though I looked like I was in hell as the heat and the climb were definitely getting to me, I kept feeling confident and aggressive and amped to be surging back. I was so happy, I actually forgot about taking another gel. I got into the aid station at the top of Corral and was still 6-7 minutes back on Jorge, and only 1-2 minutes ahead of Jesse. The back of the pack 25k runners were overuning the aid station as they too were suffering from the heat, and I got frustrated trying to wade through them to get to the food and water. I got cut off at 3 ice cubes and eventhough I wasn't moving well and feeling very hot, I wanted to be back on the trail competing, so I left without drinking much at the aid station.

As I moved over the ridge, I was convinced the redlining I'd been doing for the past 4-5 miles was going to take my kidneys or stomach out of it any second, but somehow my body kept remarkably moving along the baking ridge. Eventually the final hill before the long descent to Malibu Creek was in sight, and to my suprise, so was Jorge. I called out to him and he turned and saw me but kept pushing up the last pitch. I had taken a gel about 15 minutes prior and it seemed to be helping as I was getting some energy back in my legs. Yet, right as I peaked before the long downhill to Piuma, I began to feel that sick nausous feeling in my throat.

So much for feeling good, suddenly I was completely dehydrated, with low bloodsugar and no water in 100 degree heat with a 3 mile downhill still in front of me till the next aid station. I tried to make the best of it running efficiently, but in reality I was running with thirst for the next aid station's water and trying to get there as fast as I could without burning out. I passed Jorge and wondered if he was dehydrated too as he only had one bottle. Though I was in first, with 3.5 miles to go, I was so thirsty that I couldn't think of anything but getting to the next aid station quickly and I began to pass 25kers more rapidly running over the side of singletrack to pass them if they wouldn't yield to my parched "good morning" greetings.

Finally I made it to the creek and I jumped in and dunked my head under like a wild hippopotamus (splashing water on the 25kers crossing on the rocks..sorry!). As good as it felt, I could tell I was overheated and dangerously low on energy (yet still high on adrenaline).

The final aid station was yet again buzzing with too many 25kers and I was again cut off at 3 ice cubes by the aid station worker. I didn't need too much, but I needed enough to douse myself some more as I had been redlining for 7-8 miles now and was bright red. I tried to reason with the aid station worker, but he was not the slight bit interested in affirmative action and getting me a little more ice for my red skin.

The jog over to the final prison camp hill seemed to be going well enough, but once the incline started my body felt weak. I knew Jesse was approaching and I thought I could shuffle well enough to out kick him. Unfortunately that amount of effort after 8 miles of redlining was too much and I immediately got lightheaded and almost fell.

Though it was hard to watch Jorge and Jesse pull away on the final hill, I was so hot and weak that the repose of the finish line was all that mattered. A chance to take care of my body and stop running was all that kept me moving along gingerly down the last hill into the campground. Kate cheered me on but I could scarcely mutter a reply other than "I'm really hot" and keep my head down moving along the road. 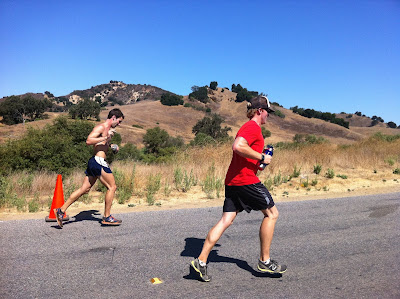 Peter ran along side of me and cheered me on in my weakened state. He kept talking and trying to give me more energy, and I put out the most I could to finish strong. I rounded the last corner puking every few steps, but kept running in to finish in 4:08, 2 minutes off of Jorge, and 1 off of Jesse. 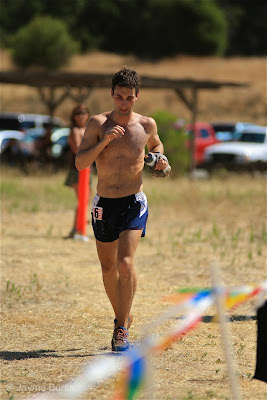 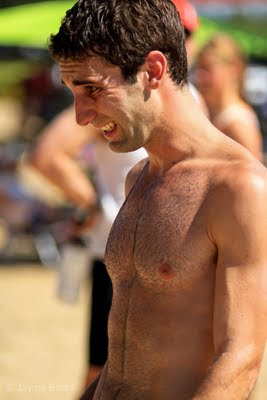 I crossed the line, felt weak, nauseous, and incredibly hot. After some TLC from Peter, Jayme, and others I was starting to cool down and regain strength. 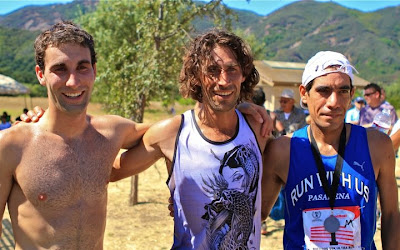 -Three amigos 5 minutes after killing each other (Photo: Jayme Burtis)

Another half an hour, 5 or 6 Tiki Punches later (shasta's fruit punch soda) I felt well enough to walk to the car, get a burrito in Malibu, surf and skate at El Porto, and taste some microbrews before an evening of surf videos with P-dubs. As intense as the 50k felt compared to racing 100 milers, I have to admit they are a little bit easier to recover from, and seem to let you enjoy more things in life other than just limping around and acting old. I've always loved this unique diversity about ultra running as each distance and challenge makes the other more desirable and enjoyable. A 50k that's fast and intense feels nice after a long and drawn out 100 miler, but a few 50k's in a row make me hunger for a more substantial accomplishment like a 50 miler with a ton of climbing, and before I know it I'm already dreaming up splits for my favorite 100's. Heck, if someone threw a half marathon my way I'd even jump into that. It's this beautiful relationship between distances and challenges that makes me grateful for the opportunities I have to sign up for races and compete. When you realize that you have the opportunity almost every day to do something special, it's hard to let a day go by without chasing the sun along a tough trail bucking and pitching you into your next opportunity (AKA chance to make something great).


Phantogram - Mouthful of Diamonds
Posted by Dominic Grossman at 10:42 PM

Great effort out there young Dom. Bet that day was a scorcher. Then again, so were your times.

Love the pictures of you suffering, I hope we can share some misery at Los Pinos in a month or so. With Jesse and Jorge running I'm sure you'll all beat each other up real good, hope I can get in on it.

Thanks Chris, it's funny how the three of us look like such good friends in that picture after pushing each other to some painful breaking points. I hope to see you in the dogpile at Los Pinos, there's a nasty climb there just begging for some over ambitious runners.. ;)

I'm glad you decided to race and finish Bulldog no matter what the outcome. Love hearin' the battle stories. You are awesome and inspire me with your tenacity and drive!