I went to the San Juan's with intentions of getting inspired and running a bit at altitude, and 4 days later those two boxes had been checked off rather emphatically.

Before I even start my description of what I encountered, I have to admit that the Hardrock course itself is already very inspiring on a computer screen. Every time I look at the various photo albums, I am awestruck by the sheer magnitude of the climbs, the epic scenery, and the creative single track that echoes and emphasizes the amazing contour lines. So, if I wanted to be green, I could've just stayed home, tracked the race, and gazed upon .jpg's for hours on end.. But I wanted to be in the green (not rich, just present in the majestic Colorado pines) so I packed up my car and drove out there for the real deal. When I got there, the computer version seemed almost cartoonish compared to the actual grandeur of the mountains in person.

We had an awesome time with the Coury family, watched some incredible performances from some of the best mountain runners in the world, and even snuck 20 miles or so of the course. Those that know Nick and Jamil (and soon to know younger brother Nathan), know they're some of the nicest frutarian, minimalist, adventure prone, benevolent ultra runners/race directors in Arizona. 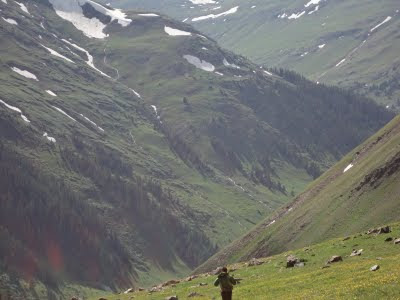 After Nick and Jamil helped me last year at Badwater, I was just hoping Nick had room for an extra pacer/crew and when he said he needed a pacer from Ouray to Telluride I was extremely psyched. Unfortunately Nick came into Hardrock with a bad glute injury, and anyone who's ever hiked 20% grade slopes knows glutes aren't a negotiable part of the equation, rather, an absolute must. Still, Nick made an pretty gutsy attempt making it all the way to Ouray at mile 56, which on the Hardrock course is harder than some 100 milers..

I still got to watch my good friend Dakota Jones assert himself like an teenage Spartan becoming a man (no, sorry, those Spartan Runs don't quite match up to Hardrock). Those that saw him push through some very tough moments holding off great mountain runners like Nick Clark, Duncan Callahan, and Karl Meltzer know what I'm talking about. Regardless of the fact that he's 20 years old, Dakota ran an inspiring race that put some strong thoughts into my mind for AC. 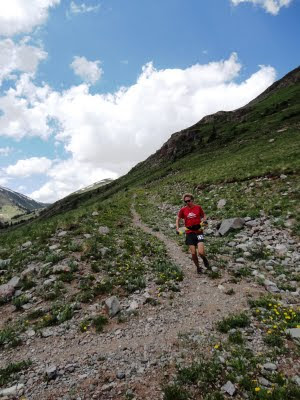 The Angeles Crest course has run the gamut of emotions for me. I've had incredible runs that made me believe I was destined to do great things, and runs that have humbled me so badly that I swore that training for the race was more of a curse than an opportunity. Ultimately though, some 8 months of spending 50-60 miles a weekend on the course have allowed me to prove to myself that through all the good and bad miles on the course, the best run I can dream of on the course is really within my reach. 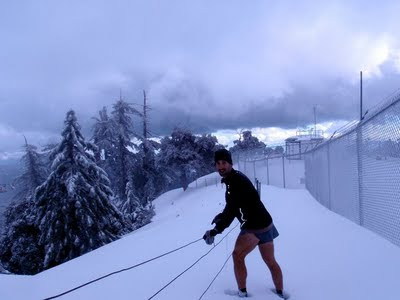 My hard work though hasn't been in vain if the day goes south. I've always loved the mountains, but the time I've spent in them has put me at a deeper connection with the trails, the plants, the animals, heck even the mountain hydrology. I wear an altimeter, but I know how high I am when I see a Manzanita around Vincent Gap. I see the soft high altitude soil below my feet, but I know the feeling before the soles of my flats touch it. I know exactly where I am in every canyon, not just by memory of repition, but by the logical location of streams and canyon walls. If I were placed on any summit, I could name all the peaks and canyons surrounding it. All these experiences have given me such an appreciation for the San Gabriels, that the race has changed from a curse at points to a deep admiration of 100 miles of wilderness.

When I go out and attempt to match splits, make no mistake, the speed that Jim O'Brien showed through Cooper Canyon to Chantry will feel like an epic prize fighter match of Rocky Balboa proportion. I don't know if things will go as well as I hope, but I know I won't go down without a fight. My fight isn't one or two sections, but the whole course. It is every mile, from Wrightwood to Alta Loma Park. The nature of the competition is true consistency; stubborn determination at the bottom of the San Gabriel river at mile 65, perseverance in the face of exhaustion in Idlehour Canyon, and courage through the pines lining the climb up Winter Creek. If I can exude those qualities at those times, this race will be a success for me, regardless of the place or time I finish in. 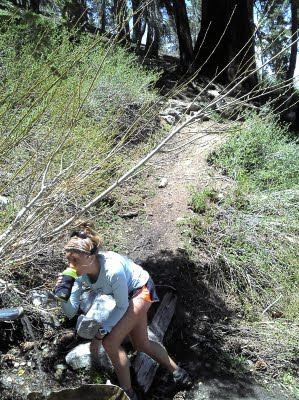 I admire all those that share the starting line with me in Wrightwood. The San Gabriels aren't the San Juans or the Sierra Nevadas. Few people in the sport know the technical nature of the trails that puts the difficulty level of the race on a higher level than the stats on paper.. But this race isn't about stats or national acclaim, it's about an intimate old school 100 mile mountain endurance run. Though many runners may dream about getting a spot on the starting line at Squaw Valley, I dream more about AC. The race directors have kept the course remarkably consistent through forest fires and other acts of man and God.

The type of people that sign up for Angeles Crest with great enthusiasm are odd balls within a sport of odd balls. The compassion of over 25 aid stations at Western States is cut in half, and the fan fare and crowd support is less than 1/10th that. The final bumps from Rucky Chucky to Auburn are magnified many times over at AC with some 14,000ft of elevation change over the last 25 at AC. Runners have longer stretches alone to figure out the mountains on their own, and discover the secrets of AC. Blogs (including this one) just don't do justice to the unique experience the course gives some 70-100 runners every year. To put it simply, this course has CHARACTER. In terms of nutrition, you are what you eat. In ultra running, you are what you run..

Race Tactics
I've spent a lot of time on the course, and the most logical race plan for me is to run miles 1-30 in control while trying not to loose more than 15 minutes off the record pace. From mile 30-74, the hunt after Jim O'Brien's record is on. Cooper Canyon (Eagle's Roost-Cloudburst) is longer than it was in 1989, so some time loss is expected. However the miles from Cloudburst to Chantry are flat out fast (but not completely flat). For me, that section separates the competitors and rewards the speedy and well hydrated/fueled runners. The last 25 from Chantry are pure heart, nothing else will buffer the pain of that section. Determination, and calculated caffeine and caloric uptake will get a runner through the fastest provided they have any legs left underneath them. 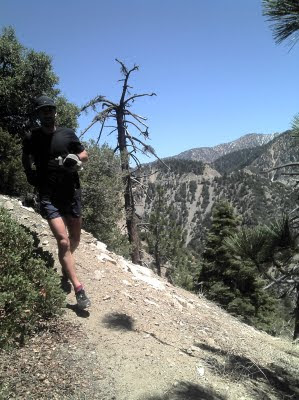 If Sub 24 is Your Goal:
Generalizing this is hard to do (depending on a runner's unique skill set) but your chances of running sub 24 are determined mostly in the first 75 miles. If you can traverse the first 30 miles with patience while making sure to run all the run-able miles well (while still taking in plenty of food and water) you have a chance of running fast through the middle 44 miles. Getting to Chantry before 10PM puts you in a safe position to run sub-24. However, anything after 10PM, you've got to be in good spirits and able bodied to finish the last 25 miles in less than 7 hours.

With that, I bid all my fellow racers good luck! I have thought about this for months, and the truth about Angeles Crest is: It isn't a race, it's a celebration of the human spirit. Enjoy it!

Good luck and enjoy it out there! That's an absolutely beautiful course and I can't wait to run it some day.

Have fun on Sat and dig deep.

I might show up (on crutches) and chear you guys on at the 52 mile station. I loved running the last 50 with Dean last year.

I hate 100s but this is a legit course and is on the list for me to do one of these years.

Thanks Jacob, I'm licking my lips thinking about being on the course Saturday with Jorge and Thomas Crawford.. Maybe a good day, maybe a bad day, but on Saturday, there's no where else in the world I'd rather be.

Hone, you belong on Hardrock, but Angeles Crest would be a solid tune up to get out there. There's some real fun parts on the AC course you'd thoroughly enjoy..