This week was very similar to the previous week in totals (100mi, 18,100ft climbed) but it felt decidedly better and stronger from both a physical and mental perspective.

New Balance launched a shoe last week that maybe one of the best minimalist running shoes ever (aptly named, the Minimus). I can honestly say that the way this shoe fits, performs, flexes, and responds is the closest to blending the worlds of minimalist and barefoot running. The dividing line between these two philosophies has been speed: a barefoot runner (5 finger/luna sandal) has a hard time flying as fast as another MT100 runner down rocky singletrack. However the devout barefoot runner cannot bring themselves to wear something as relatively "stiff" or "thick" as a MT100 that would ruin the euphoric barefoot experience. 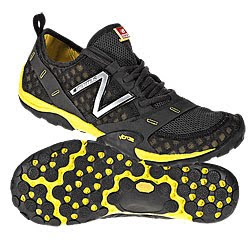 Going from the MT100 to the Minimus, I didn't expect too much at first. The shoes were unique entities, but I thought my MT100's were the thinnest a major company like New Balance would go. However when I put on the Minimus, a couple weeks ago at a demo, I could tell they were much more than a thinner MT100.

They have a remarkably seamless upper that fits like a sock. There are rubber overlays on from the pinky toe to the inner ball of the foot, and a heel wrap as well that allow the shoe to perform like a true natural extension of your foot. The sole itself is made of durable Vibram brand rubber, and features a circle/hexagonal patter that flexes well in every direction with only a 4mm drop. When I took it to Temescal, the climb in the 2nd mile that rises about 5-600ft exposed just how stiff my MT101’s were relative to the Minimus as the climb was markedly more difficult. A stiffer shoe when climbing gives the foot more leverage and makes climbs easier. However a more flexible shoe puts more stress on the foot to work on its own. Raving about the said shoe on Thursday at Temescal

As I came down the Lee Hancock Memorial Trail, I really began to feel the seamlessness of the upper. Downhill running is the true deciding factor of fit for a minimalist shoe. When a minimalist runner heads downhill, they mostly use the sides and the balls of their feet to absorb shock effectively without hurting their heels or knees. The speed and force that the foot places on the shoe require an effective upper that keeps the forefoot in place and prevents too much movement in order to avoid injury, and damage to the shoe. Traditional shoes never let your toes touch the front of the shoe, but minimalist shoes use the toebox much more. The Minimus pretty much nailed this requirement putting me in surprisingly secure control of my body, and allowing me to run surprisingly fast and technical with confidence in a very thin heel. Though there were some sharp rocks, the Minimus still did an adequate job of protecting my foot from any noticeably sharp pain.

And that long product review brings me too my main point: Minimalist running is freedom and creativity that result in an enhanced running experience. Traditional running shoes are more like casts for the foot (and mind). I was once a fat shoe sinner owning shoes with names like “Kayano” and “XT Wings” and I ran in them religiously, believing nothing else could allow me to cover great distances on my feet. I eventually started to move down through the lunar glide and speed cross into the MT100. The change brought about more than just really high arches, it brought about more attention to foot placement, and more creative ways of running technical trails. Where the Wings would let my foot run over any terrain imaginable, the MT100 challenged me to flex my foot and pick better sections of trail to keep a smooth cadence. This smoother cadence took the pounding off my knees from heal striking, and gave me better efficiency in longer distance races. Additionally, I feel more in touch with the trail, and enjoy the terrain that much more. Trail running is special; there’s unique features and sights and sounds that make it much more than just “going for a run”.

My best analogy is road running to me is like watching a movie on mute with subtitles; you understand the plot, and get the just of the story, but don’t delve into the inflection and tone of the actors. Then there’s trail running in regular shoes, which is better, but still like watching a movie on an ipod; the experience is better than the previous, but you don’t feel encapsulated in the movie. Finally, there’s minimalist trail running, and it’s pretty much Avatar in IMAX 3D with THX3D sound turned up loud; there is nothing between you and the true experience of navigating all the nooks and crannies of a technical and challenging trail.

So, if you have a choice, why not live in 3D? Minimalist running isn’t automatic; there are muscles in the ankle, arch, shin, and quads that need to be toned to run well, but it is worth the time and effort. The Minimus isn’t the answer for everything, but it is a fun everyday trail shoe that does a great job at keeping you connected to the trail and making the most of the experience.

Sat: 27mi, 6800ft, 5:00 – Chantry-Wilson-Lowe-Idlehour-Chantry. Awesome run that had a little bit of everything, Jorge, Sean, and I climbed well all day, but the end got tricky as we ran out of water. 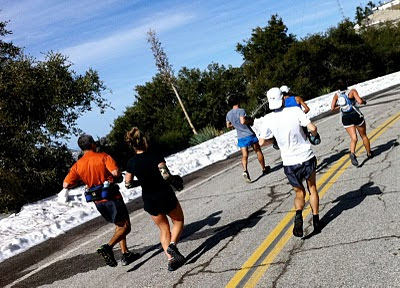 Sun: 17mi, 2400ft, 2:45 – Latigo, BBT, Solstice with Jonathan Toker. Awesome day in the Santa Monica mountains, tons of wild flowers, and a great variety of terrain with everything from a 5:00 mile with JT in the minimus to a bushwacking drive across a ridge
11mi, 2500ft, 1:52 – Temescal-Skull Rock 2-Bottom-Skull Rock 1 – Minimus felt great in the morning, so I took them out again and fell.. in love! It really worked well, and felt great to run in the day after the long run on Sat.

Overall, a great week. I'm eager to go into Old Goats in 2 weeeks with some great training under my belt.


Trampled by Turtles - Victory
Posted by Dominic Grossman at 8:54 PM

I checked the Minimus out at Sport Chalet the other day. I am glad they are finally going back to the original 790 concept. I always thought the 100s and 101s were way over hyped and half the shoe as the 790. The Minimus does seem like a fun shoe to traipse around the hills in.

Of course there is nothing minimal about the Minimus price though. I hope you get a get a bro deal (I bet you do) because 100 bucks is a rip!

I have just been buying last years CC flats at a local running store for 40 bucks. They are just as light, last just as long, and are just a comfortable. They did initially tear the crap out of my calves though. It took a while to adapt to them as a full time shoe.

I had a groupon for Fleet Feet Encino, so half price wasn't too bad. But New Balance really went all in with this design, and the pricetag (though I thought it was too high at first) isn't completely unfounded.

First off, the stiching on the inside is really smooth, and running sockless should be possible for every runner.

Secondly, CC flats have strong toe off plates that aren't easy to run long distances in, they don't have wide toe boxes for natural splaying of the foot, and they are don't feature the durable rubber metatarsal wrap that the Minimus features.

I think that rubber wrap greatly increases the life of the shoe (all my flats have blown out there) and the technical singletrack performance which makes it worth the money. From a conservation standpoint, I'd rather have a shoe that lasts longer for $100 than two shoes that cost $140 and require more materials to be thrown away after use.. Look for sales or groupons, I'm excited to hear they're in sport chalets so more ppl can try them!

As always, really getting a lot out of your training updates, but I've been curious: what's your nutrition like, on and off the course?