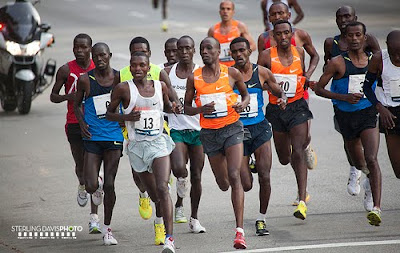 The long-anticipated LA marathon came to town with a "stadium to the sea" course that officials described as the most intra-city cooperation they'd seen since the '84 Olympics.. And it sorta went smoothly for the most part. The traffic into Dodger Stadium was pretty bad, but I had a full hour to warm up. Starting the race took an extra 20 minutes due to some "cars parked on the freeway" (literally) but that wasn't the longest delay LA's ever had (2003 or 2004 was a full hour). The holding pen's for sub 3:00 and sub 4:00 were similar to trendy LA clubs; people in them that didn't really belong but had connections, rules enforced that made no sense, and a little bit of pushing and shoving, but I eventually made it within 10 yards of the elite athletes and got a clean start without tripping over anyone. All in all, the race turned out pretty well.

I guess I should admit that even though I love steep, hilly trail runs, I was part of the majority that was not prepared for the hills. Going into a race like LA, I thought the best thing I could do for my ultra running is take it seriously and try to run my best time so I could use it as a speed workout and confidence booster. That said, the intended goal for the day was 2:35-2:45.

5k-17:31
Adrenaline pumping, I charged through the first mile around Dodger stadium in 5:38 (which is not flat) as I passed by "cheering fans" who were actually runners waiting to make it across the start line. The descent out of the stadium was a fluid 5:36, and before I knew it, I'd clipped off a 5:39 coasting into Downtown. The field looked strong, and I felt lucky to have such great running company for the day's goals.

10k-36:47
The sustained excitement of the course was apparent as we came into mile 4 charging up a steep 0.2 mile hill up to the Disney concert hall. The climb there was the last thing I expected after having cruising so quickly through the last miles, and engaged some trail muscles that weren't expecting any usage, but served their purpose to keep me on pace. It took some focus and concentration to get up it without getting sucked into powerfully strong beat of the Korean war drummers lining the top of the hill. I crested the top slightly out of breath in 6:11, and tried to take stock of my effort level. I continued on to mile 5 in 6:30 taking on another "steep" descent and climb. I allowed my body to relax a little bit once I saw a guy holding a sign promising easier terrain on Sunset once I made it down Hollywood blvd. That was probably the best sign anyone could hold in a race, and much more beneficial that the otherwise consistent loud cheering. 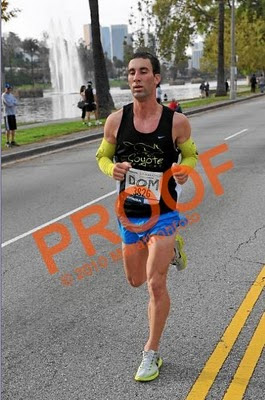 15k-55:19
Settling into a groove, I had my most comfortable section of the race going 5:50, 5:59, and 6:02. Things were balanced from a little bit of heartburn at the start of the race (too much pad thai the night before), and my body was confidently flowing along. I saw firsthand the observation of Dr. Toker's that many people don't run tangent's in races, but take longer routes in the interest of staying on one side of the street. I clipped off 10-20m a turn as other runners stubbornly stuck to the left or right of the road as if they were running with other cars on the road. Things felt right, and the decision to fore-go Powerade and stick to two Roctanes and two Salt Sticks was about to be tested.

20k-1:14:27
I took a GU at mile 10 and a Salt Stick at mile 13 and realized I had some work to do in finessing the art of running 6:00 pace and eating/drinking on the run. I clipped off 6:02, 6:04, and 6:05's with a bit of effort to absorb the provisions. My body was definitely starting to ache, but my hope was that the nutrients would soon kick in and do their trick.

25k-1:33:32
I cruised through the half in 1:19:28, and lost some time absorbing the Salt Stick, running 6:33, 6:04, 6:05. The 6:04 should have been much faster as there was a long downhill onto Santa Monica Blvd, but I was starting to run out of fast twitch muscle fibers. The flat sections exposed a flat and lethargic stride, that would soon have to power a rolling section through Century city.

30k-1:56:47
Coming down Rodeo Drive, I got a little overly excited by the ridiculous cheering section in front of Niketown. After that, I pushed up and out onto Santa Monica Blvd and started to feel a mental low as I climbed the rolling hills with fewer people out and wider roads that made me feel like I was running much slower than I actually was. I downed my last Gu at 18 and clocked the slowest 5k of the race (23 minutes). 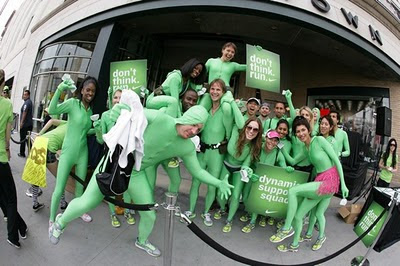 35k - 2:14:50
The VA wasn't the easiest part of the course, but it was where I showed the most heart taking the turns and short climbs hard. I couldn't bear to think of slowing down more and descending to another high 2:49, but I didn't have much speed left, so I made it my goal to do everything I could to get to 26th street as fast as possible and in one piece.. and it pretty much worked, as i took the 5k in just about 19 minutes while passing a few other runners. I didn't look pretty doing it, but I knew from my splits that it was working. 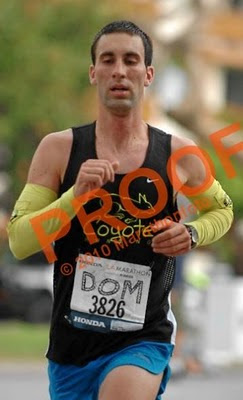 charging out of the VA, marathonfoto 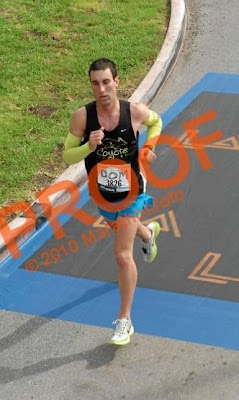 40k - 2:35:21
I had lost all power in my calves coming out along San Vicente, and it showed in my stride and my time. The thighs did all the work propelling my body to a 20:30. I tried to take as much advantage of the final downhill 2 miles, but it was too little to late. Paul escorted me in from 26th and kept me from melting anymore and getting me to the line with some extra crowd support (thanks to him). It figures he'd be good at that stuff.

Finish 2:43:57
Painfully, but proudly, I took my PR, my finisher's medal, and food walking through the finishing chute with great race support at my side. The race had hurt more than I expected, but I felt great thanks to all the crowd support cheering me on. I probably would've packed it in and settled for a slower time if it wasn't for the great crowd support that day. I gave LA some props on the interview below that made it on the news (around :41 seconds). All around a great day, and I was happy with the results.


I leave you with the indie-folk-bluegrass virtuosos:
The Avett Brothers - Paranoia in B Flat

Posted by Dominic Grossman at 10:39 PM

&& thanks to your amazing family!